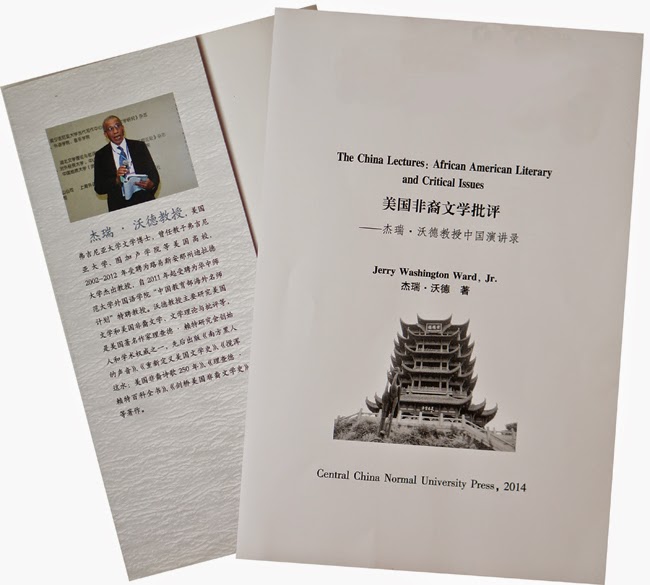 Jerry W. Ward, Jr. has been an active participant in lively conversations about black writing and literary history for about half of a century now. In fact, Professor Ward’s conversations about black writers and writing predate the label “African American literature,” which so many of us now use to refer to a distinct body of artistic compositions. We can even plausibly say that in fundamental ways Professor Ward contributed to the exchanges that gave rise to the field of African American literary studies. He was indeed part of the intergenerational group of teachers and scholars whose pedagogical, professional, and publishing activities assisted in establishing a place for black writers in the academy.

When I arrived at Tougaloo College in Jackson, Mississippi, as an undergraduate in the mid-1990s, Professor Ward was more than two decades into his career, already a local legend. At the time, like most of my classmates, I had less specific knowledge of who he was as a prominent scholar of black literature. More immediately, he was known to us as a devoted and challenging teacher-thinker. In one of many memorable instances, he provided feedback on an essay by one of my peers by informing her that “your thesis dances like light on water. In other words, nothing is focused.” Thanks to phrasings like that, we were far more aware of the poetic lines that Professor Ward was writing in the margins of our papers for class assignments than we were with his published poems and scholarly articles.

In retrospect, we were actually reaping the benefits of studying with an accomplished poet, researcher, book reviewer, literary historian, and humanities scholar who chose to pass or disguise himself as a teacher. How many among the students at Tougaloo College in 1976 or in 1986 or in 1996 knew much concerning Ward’s work as a Richard Wright scholar? How many of us knew of his collaborative exchanges with artists and scholars Houston Baker, Jr., Margaret Walker, Maryemma Graham, Trudier Harris, Kalamu ya Salaam, and so many others? Who would have guessed back then that Professor Ward would, let’s say, deliver lectures on African American literature at universities in China? Perhaps, not everyone would have been surprised. After all, we had witnessed him routinely bring the larger world to us at our small college in Mississippi so the idea that he might discuss black literary art and culture with colleagues and students in Beijing, Enshi, Hangzhou, Nanjing, Wuhan, and Xi’an would not have been beyond what we might expect from him.

Professor Ward’s lectures in China are an extension and continuation of the many lectures and presentations that he gave at libraries, universities, and literature conferences in the United States over the decades. Those U.S. presentations were, in turn, linked to the discussions he had with hundreds and hundreds of students at Tougaloo College (1970 – 2002) and Dillard University (2002-2012) in New Orleans, Louisiana. An awareness of distinct populations of readers, particularly black students from the South, has been central to Ward’s approaches to presenting ideas about literature. Most notably, the processes of assisting literature students become active responsible citizens, not simply college graduates, led Ward to think seriously about the obligations – a recurring word in these lectures – of readers, teachers, artists, and literary scholars. For Ward, what we and others did or did not do with literary compositions, with cultural productions, and with language carried real-world and historical consequences. These lectures on Richard Wright, Houston Baker, Eugene B. Redmond, Natasha Trethewey, African American literary art, and history delivered for audiences in China speak to Professor Ward’s expansive commitments as an active reader, teacher, and scholar.

The appendix, which features Professor Ward’s blog entries produced over the last few years, also deserves special notice, because that portion of this book represents a new development in the publishing history of African American literary studies. Leading and accomplished African American literature scholars typically write books and articles. So far, blog entries have not been central to their writing and publishing activities. In this regard, Professor Ward quietly breaks new ground and exercises yet another obligation—that of making conversations and insights about black literary works more readily available to readers, this time, online readers.

As a genre or mode of expansive possibilities, the blog format is especially fitting for a vigorous, diverse thinker-writer like Professor Ward. Noticeably, as a blogger, he covers an even wider range of topics and figures than he does in his scholarly articles and lectures. His blog entries comprise short essays, poems, open letters to literary artists and friends, meditations on films, blueprints for lectures, book reviews, and reflections about current events. As a senior scholar in the field who also produces online work, Professor Ward offers early models for the kind of writing and publishing activities that will necessarily become commonplace for a younger generation of literary scholars.

The China Lectures expands the conversations about writers and writing, history, technology, scholarship and criticism, and the consequences of language and artistry. This book, in short, extends the longstanding efforts of Jerry W. Ward, Jr. to fulfill the many obligations associated with reading and sharing ideas about African American literary art and culture.

I am greatly honored that your generous preface is circulating.