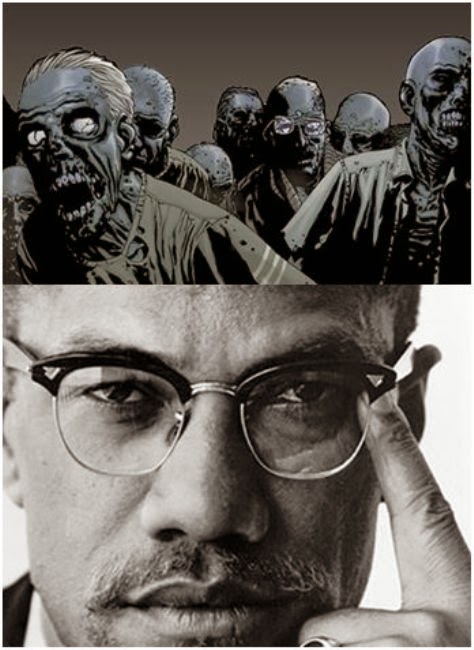 Early in the semester in my Malcolm X class, I was talking to students about "consciousness." But if we're going to talk about consciousness, I was noting, we need to start with the opposite. What does it mean to be unconscious, especially in the context of black folks seeking to build knowledge and liberate themselves?

Maybe we could begin by considering zombies. Not just those we see on The Walking Dead but those from far back like where the idea originated in Haiti. In Haitian folklore and traditions, the idea of a zombie emerged among enslaved populations to describe someone who brought back to life to serve as a slave even in death. In this context, zombies may have been viewed as the working dead. Or put another way: who provides all the mindless, dehumanizing free labor? Zombies.

Black folks in this country have been building knowledge and displaying an awareness of their conditions for...well, since the beginning. Nonetheless, it was not really until the 1960s that this word "consciousness" or the phrase "black consciousness" began to really gain considerable traction. Malcolm X frequently spoke of the "masses" who "awakened" and came to a new understanding of things. He often spoke of what it meant for black people to be intelligent and lively aware of many trappings of physical and mental oppression.

He was inclined to view some modes of activism as too passive, perhaps zombie-like? In "Message to the Grassroots," he offered the following analogy:


That’s Tom making you nonviolent. It’s like when you go to the dentist, and the man’s going to take your tooth. You’re going to fight him when he starts pulling. So he squirts some stuff in your jaw called novocaine, to make you think they’re not doing anything to you. So you sit there and ’cause you’ve got all of that novocaine in your jaw, you suffer peacefully. Blood running all down your jaw, and you don’t know what’s happening. ’Cause someone has taught you to suffer — peacefully.

In our day, the notion of someone with "blood running all down your jaw and you don't know what's happening" parallels scenes of zombies covered in blood and having limbs severed while mindlessly stumbling along.

After Malcolm X was killed (50 years ago today), people began more actively studying his speeches and philosophies. What they found or rediscovered was a champion of black consciousness. He opposed the idea that black folks might continue to wander around aimlessly as if sleepwalking, or as if they were zombies.