Middleton A. Harris, Toni Morrison, and The Black Book 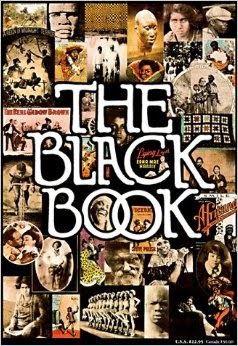 After several false starts, I'm finally coordinating a useful index for The Black Book (1974). My graduate assistant Jeremiah Carter thankfully did dozens of the initial identifications of entries, and now students in one my African American literature courses are helping me annotate the entries on Lit. Genius.

The Black Book is a large scrapbook. And although the publication is infinitely fascinating, it does not contain a table of contents or index, making it difficult for readers, especially younger readers unaware of the incredible source materials.

People usually refer to The Black Book as Toni Morrison’s book, mainly because she was an editor at Random House when the book was produced, and she contributed to the overall production. Too, she wrote two essays -- one for Black World magazine and then later one for The New York Times -- in 1974 to promote the book.

The Black Book actually owes much to a collector, Middleton A. Harris. In 1964, he founded  an organization “Negro History Associates” to advance his interest in documenting black culture and history. He collected photographs, newspaper clippings, illustrations, and various other African American memorabilia. His materials formed the basis of the many, many items that appear in The Black Book.

Harris died in 1908, a few years after the book was published. He wasn’t an “author” in the traditional sense, which helps explain why he’s mostly loss to literary history. Still, he's in the tradition of some of our great collectors and bibliographers like Arthur Schomburg and Dorothy Porter.

Harris and Morrison worked with collectors Morris Levitt, Roger Furman, and Ernest Smith on the construction of The Black Book. They received assistance from a Random House designer Jack Ribik and a production manager Dean Ragland. In one of her essays about the publication, Morrison noted that those 6 men and she:


built the book, item by item, page by page, signature by signature. It was more like planting a crop than making a book, but that was precisely the spirit we wanted--an organic book which made up its own rules.

That collaborative spirit is fascinating.

In her later novels, Morrison drew on materials that she encountered in The Black Book. Most notably, she heard of the case of Margaret Garner, an enslaved woman who killed her own daughter to avoid having the child live a life in slavery. Garner's story served as a vital muse for Morrison's novel Beloved (1987).

In the opening of Song of Solomon (1977), one of Morrison's characters mentions that "I loved you all" in his suicide letter as he prepares to leap from a hospital to his death. Those words resemble an excerpt from the closing lines of Gwendolyn Brook's poem "the mother" included in The Black Book:

Perhaps what drew Morrison to the project and what she gained or solidified by collaborating with Harris, Levitt, Furman, and Smith was the whole art and practice of collecting. Beyond the plots of her novels, Morrison's narratives serve as special collections showcasing or even preserving aspects of black history and culture. The Black Book gave her and many others blueprints for what a remarkable, wide-ranging African American collection might look like.