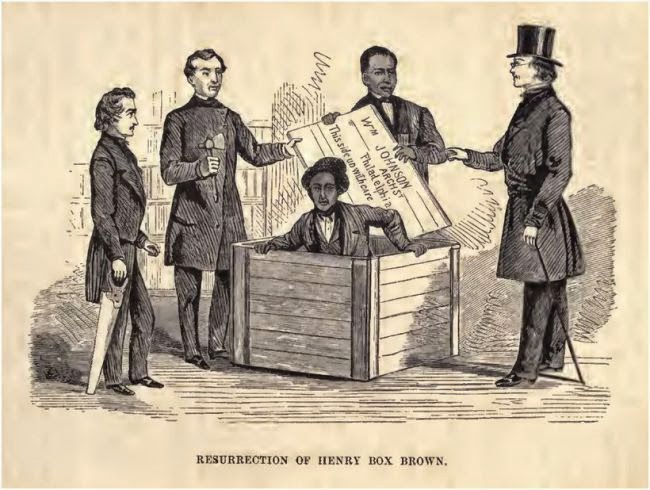 "I emerge to the amazement of all." --Allison Funk
The ex-slave Henry Box Brown (who lived from 1816–after 1889) and the contemporary poet Allison Funk share a common interest: they are intrigued by great escapes. Henry “Box” Brown was once a slave living in Virginia. However, in 1849, he escaped bondage by arranging to have himself mailed to Philadelphia, Pennsylvania, in a large wooden box. In recent years, creative writer and SIUE professor Allison Funk wrote a series of poems about the literal and symbolic acts of escape artists—people who perfect the art of getting out of tight spaces and difficult constraints.

Last Thursday, January 29, I created a series of activities where I encouraged students at the SIUE/East St. Louis Charter High School to channel the great escape act and writing of Henry Box Brown and Allison Funk, respectively.

For one assignment, I presented students with an excerpt from one of Funk's poems, offered a version of the poem with blanks, and asked the students to fill in words. Here go some of the results:

Notice how the wildflowers
open as if nothing
restrains them. –Allison Funk

Notice how joy
rises as if nothing
restrains it. --G.S.

Notice how people
protest as if nothing
restrains them. T’Yon

Notice how the people
act as if nothing
has happened. –DeMarco

Notice how the earth
spins as if nothing
restrains it. –Anonymous

Another assignment prompted the students to highlight something they noticed in East St. Louis. Here go samples:

Notice how morale in East St. Louis
is low  –Anonymous

Notice how people in East St. Louis
are nice  –Anonymous

Notice how the buildings in East St. Louis
Crumble  S.D.

For another assignment, I prompted the students to produce a single sentence that contains 20 to 35 words, describing a real or fictional escape. I added more restraints to the assignment, informing the students that their sentences must include the words “freedom,” “restraints” (or restrain), “persistent,” “trapped,” and “escape.” Here are two examples:


In order to gain freedom, I had to remain persistent, continue through the struggles, escape my insecurities, and fight against any and everything that tried to restrain me. –Mahlik

When I was trapped in my suffering, I thought of nothing but freedom and escape from the restraints society subtlety imposed on us, and I remained persistent because I knew that my sufferings were redemptive. –T’Yon

I noticed that we struggled most with composing long, complex sentences. So next time, I'll develop activities that allow us to work on that area. We'll also see if we can add more creativity to short poems.