Malcolm X -- the poetic anti-poet, who was also a poet 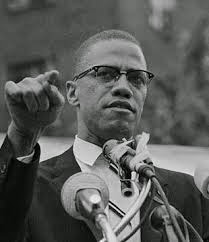 No doubt about it, Malcolm could pass as one of our great poets. At least, there's something about the poetics of his speeches that reminds you of some of your favorite poets. That's no coincidence by the way.

Amiri Baraka and Sonia Sanchez were always up front about borrowing Malcolm's techniques. Rakim, Jay Z, Jay Electronica, Black Thought, and many, many other rappers have drawn on techniques popularized by Malcolm as well.

Listen to Malcolm's "Message to the Grassroots," and among other things, you'll hear someone who's invested in interrogating language. He frequently uses the phrase "the so-called 'Negro'" displaying his skepticism with that term. He spends considerable time discussing "the difference between the black revolution and the Negro revolution." He uses name-calling to insert jokes; he signifies; he takes on different personas. In other words, he draws from a poet's toolbox.

At the same time, there's something that could be viewed as not so much like a poet, at least not like many of our most critically acclaimed, award-winning poets. Malcolm opens his speech noting that "We want to talk right down to earth in a language that everybody here can easily understand." The competition is so fierce in some realms of contemporary poetry that poets have been inclined to avoid writing for "everybody" in an "easily" comprehensive language.

Too, poets, that is, African American poets, must increasingly write for multiracial audiences (or award selection committees) if they expect to succeed (that is, by several standard measures of "success."). Malcolm, by contrast, spoke directly to and for all-black audiences. Even before becoming a national figure, he traveled the country speaking primarily for black congregants in the Nation of Islam. It would be uncommon, even for African American poets, to have access to the kind of black curriculum that Malcolm relied on to develop and hone his skills.

So in some respects, Malcolm was deeply poetic but an anti-poet along the lines of interests and ideology. Remember that all those Black Arts Movement poets who used Malcolm as a model for their enterprise frequently questioned the limits of being traditional "poets" in order to break on through to something new.

Inspired by Malcolm's death, Baraka increasingly abandoned some aspects of who he had been as a poet in favor of something else., which of course included becoming a kind of new black poet. Malcolm too had a past as a poet. In addition to his legendary transformation in prison, Malcolm also spent time behind bars composing poems, which he included in letters to the Nation of Islam leader Elijah Muhammad.

When we listen to Malcolm's fiery speeches, we're also hearing the soul of a poet.