Elizabeth Alexander as a crucial connector 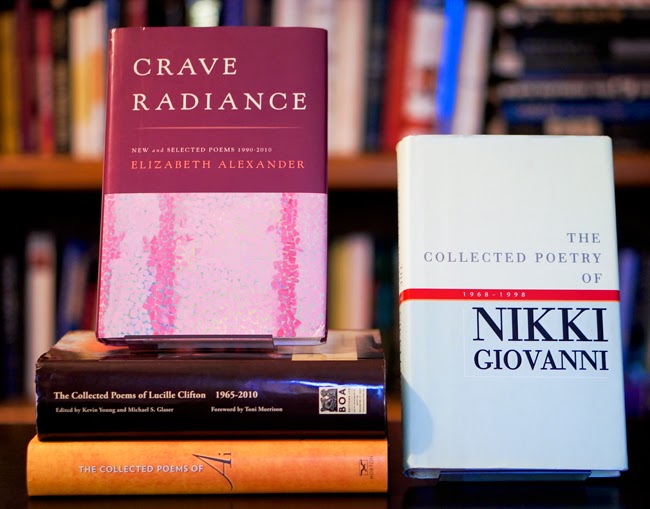 Elizabeth Alexander is one of our crucial connectors -- a poet whose works and place in histories and her professional activities link her and her readers to a range of writers and audiences. Her body of work represents an important crossroads of where we've been and where we're going.  Alexander's recent appointment as the Frederick Iseman Professor of Poetry, the first endowed chair at Yale dedicated solely to the field of poetry, signals another important step in her long career.

Back in the mid-1990s, Alexander was one of the first "contemporary" African American poets I read. In high school and then college, I was primarily exposed to canonical  poets like Langston Hughes, Margaret Walker, and Gwendolyn Brooks. Somehow, outside of class, I discovered Alexander's Venus Hottentot (1990).

Given all the research, writing, and programming that I've done over the years related to persona poems, it's fitting that I discovered Alexander's "Venus Hottentot" at such an early stage. On the one hand, Alexander's poem extends a long tradition of persona poems produced by poets such as Paul Laurence Dunbar, Hughes, Dudley Randall, Gwendolyn Brooks, and Hayden, to name just a few. On the other hand, Alexander anticipated, if not inspired, the contemporary interest in persona presented in Thylias Moss's Slave Moth, Tyehimba Jess's Leadbelly, Frank X. Walker's Buffalo Dance, to name just a few.

As a poet who also produced essays, Alexander echoes the practices of Baraka and Larry Neal. At the same time, she anticipates the cultural criticism and scholarly writing of, say, poets-essayists Evie Shockley and Kevin Young.  Alexander's essays reveal a thinker interested in black history, art, poetry, you name it.

Whatever the case, decades ago, it was common for black poets to have appointments or close ties to African American Studies departments. Back then, English departments and Creative Writing programs were less inclined to employ black faculty. Alexander's appointment then is a throwback of sorts, an echo of when poets were formally linked to African American Studies programs.

By the way, Alexander's identity as a scholar are evident when we consider that in addition to giving poetry readings, she is frequently invited to give lectures on literature, cultural history, and art. In other words, Alexander, among other subject positions, is an African American Studies scholar.

Over the last two decades, Alexander has been one of our most prolific poets. The publication of Crave Radiance: New and Selected Poems 1990–2010 (2010) makes her among the first of the "new" poets, or more precisely poets born after 1960, to have published a collected works book.  Several years from now, we'll likely have others follow Alexander's collection.

Beyond her actual poems, Alexander has consistently served as a judge for poetry contests, which means she has been in the position to influence the trajectory of various poets' careers and also assist in validating particular aesthetics.

There's an upcoming Museum of Modern Art exhibit "One-Way Ticket: Jacob Lawrence's Migration Series and Other Works." That Alexander was chosen to contribute to the show by organizing a group of poets to produce accompanying pieces should come as no surprise. She is, after all, one of our crucial connectors.

Related:
• Notebook on Elizabeth Alexander
Posted by H. Rambsy at 9:15 AM