Tony Medina and the Top 5 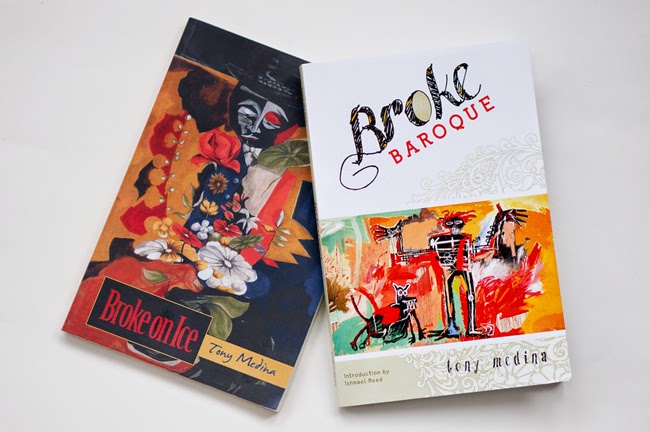 Not in rap. Not among NBA players. Not the NFL. But if you're identifying your top 5 blues poets, you have to seriously consider Tony Medina, right? On the strength of his "Broke" poems -- where he's writing in the voice of this everyman homeless man.

I'm aware of Dunbar, Hughes, and Sterling Brown. There's Baraka and Sonia Sanchez. Obviously, Sterling Plumpp. I got you on Kevin Young and Tyehimba Jess. Wanda Coleman, Robert Hayden, and Michael Harper produced blues poems, yes. So did Margaret Walker, Sherley Anne Williams, and Etheridge Knight. All them and more. No doubt.

You gotta consider your guy Medina in any conversation about blues poetry, especially when it comes to the construction of a memorable hard-luck character who narrates his trials and tribulations that have you laughing to keep from crying. Medina's character Broke tells tale after tale about his struggles in poverty, constantly hungry, and perpetually homeless on the streets of New York City.

In "Broke Back on Concrete," Broke observes that he's been down and out so long that he has to "put out / An APB / On the / Sun." In "Broke Job Hunting," he says:


In addition to the blues-inflected humor of the poems, I make the case for Medina in my top 5 of blues poets because of the quantity of Broke poems. So far, he's produced 3 books in the series: Sermons from the Smell of a Carcass Condemned To Begging (1998), Broke on Ice (2011), and Broke Baroque (2013), totaling approximately 300 poems. We've rarely heard so much from a single character in black poetry. We've rarely witnessed any poet give so much attention to those living in poverty.

"Don't stab me," says Broke to those of us passing him by on the streets, "with those eyes of yours." And:


Broke informs us about the hazards of the streets -- being evicted from abandoned buildings, suffering abuse at the hands of police officers, finding food, and so forth. Broke has managed to survive because, as he observes in "Broke Higher Education," he's studied street life and hunger for so long that "I got a / PhD in / Poverty."

Anyway, all of that is to say, along with other things, when it comes to a top 5 of blues poets, you're obligated to consider Tony Medina and his Broke poems.

Related:
• Notes on Tony Medina's Sound
Posted by H. Rambsy at 9:18 AM

This is wonderful! Also, don't leave out one of the greatest blues poets living: Angela Jackson~ http://www.poetryfoundation.org/bio/angela-jackson#about