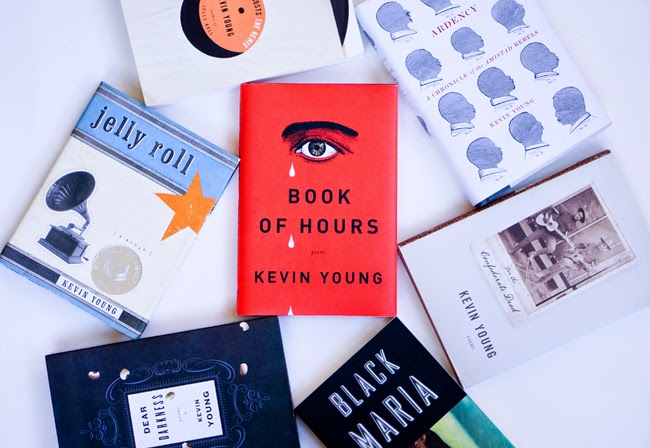 In some respects, I felt like I discovered Kevin Young late. I came across To Repel Ghosts (2001) in around 2002. I view my arrival to Young's works as late because of his previously published books at the time--his volume Most Way Home (1995) and the anthology he edited Giant Steps: The New Generation of African American Writers (2000).

I really started playing close attention to Young's poetry in 2003 or 2004, right after I completed my major research project on the Black Arts Movement. After spending so much time on 1960s and 1970s writers, I was looking to catch up on contemporary poets, and well, there was Young.  I've tried to keep up with his active book publishing for the last 10 years or so.

This year, I was on Young's Book of Hours (2014), which was published back in March. I was especially interested in the first sections of the volume where he writes about the loss of his father. I was at the Furious Flower Poetry conference in 2004 when Young gave a reading, and there, he noted the loss of his father in a tragic hunting accident. Since that time, I've noted the publication of his poems about his father.

Back in 2009, I encountered Young's poem "Bereavement" in The New Yorker. I later came across "Charity" in Progressive and "Rosetta" in The New Republic. After reading those individual poems as well as Allison Joseph's my father’s kites: poems (2010), I wondered would Young produce a full-length volume comprised of poems he wrote about his father.

The first two sections of Book of Hours concentrate on his experiences losing his father and making funeral preparations. The next sections in the book focus on the birth of Young and his wife's child. In some respects then, Book of Hours is about losing and gaining--the death of a father, the birth of a son.

Reading Book of Hours took me back to The Art of Losing: Poems of Grief and Healing (2010), which Young edited. And of course, that led me to taking another look at Dear Darkness and some of his other works. In other words, reading Kevin Young in 2014 meant going back and reading his works from previous years as well.