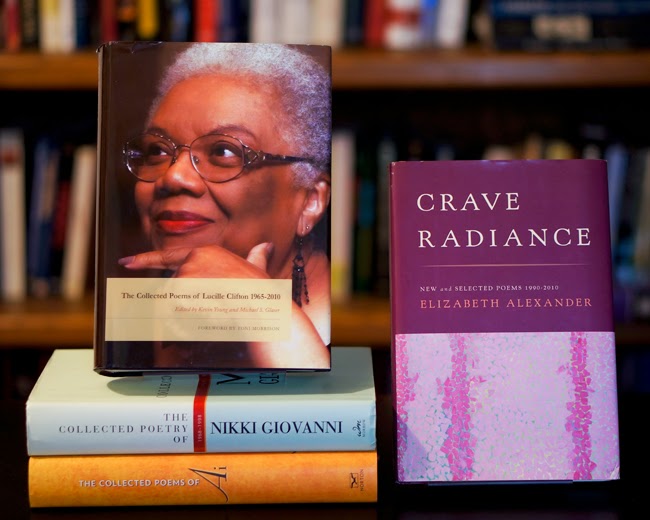 The presence of Lucille Clifton's poetry is integral to the project #BlackPoetsSpeakOut. Beginning on November 28th, black poets began video recording themselves reading their owns and poems of others in a show of solidarity with justice movements against police brutality. They then posted the poems on social media with the hashtag #BlackPoetsSpeakOut.

"I am a black poet who will not remain silent," the poets announce before reading, "while this nation murders black people. I have a right to be angry."

More than 125 poets have contributed to the project so far. While the majority of the poets  read their own poems, several have read works by various other admired poets, including Robert Hayden, Gwendolyn Brooks, Sonia Sanchez, June Jordan, and Nikki Giovanni. The most recurring poet, however, has been Clifton. Consider the following list:

The poets come from a range of different and sometimes intersecting backgrounds. They occupy various subject positions and produce contrasting kinds of poetry. Yet, they are drawn to a common literary artist.

Clifton passed away in February of 2010. She remains a beloved poet, particularly among poets. On 21, September 2010,  Joanne Gabbin and Nikki Giovanni organized "73 Poems for 73 Years: Celebrating the Life of Lucille Clifton" at James Madison University in Virginia. The event "brought together poets from all around the country" who read Clifton's poetry and celebrated her life.

I've been aware of Kelly Norman Ellis's work for years now. So I was pleased to see her contributing to #BlackPoetsSpeakOut. I was even more intrigued to see that she selected a work by Clifton to read. Through Clifton's "jasper texas 1998," Ellis as well as Youlanda Barber remind us that we have a history of violence against black men and a history of writers responding.

Those poets contributing to #BlackPoetsSpeakOut continue to advance recognition for Clifton and her poetry. Of course, the presentation of her poems in the context of a project that responds to police brutality offers an opportunity to rethink or expand our considerations of Clifton's writing. When a group of poets participate in a movement for justice, they bring militancy, a spirit of resistance, and works by Lucille Clifton.