Trudier Harris's MLK book in the context of a remarkable career 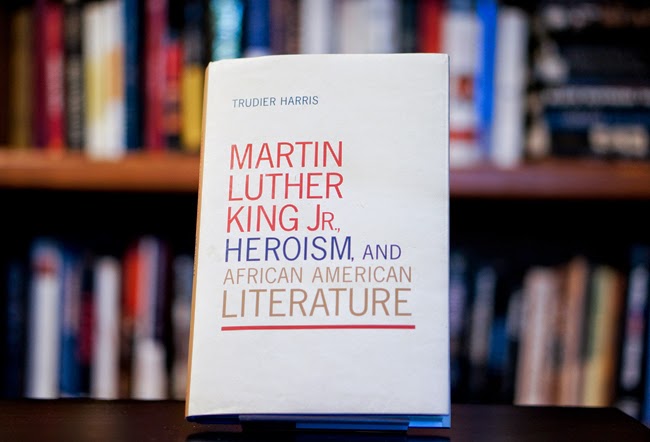 Once again, Trudier Harris appears at just the right time. Who knows--maybe she's a superhero?

Taking a look at Harris's overall scholarly contributions, we might say that consistent expansive coverage characterizes her career. Beginning in 1975 with her first published article on Alice Walker up to this current book, Harris has published approximately 40 articles in journals, 48 articles in books, 5 edited books, 9 co-edited works, and 10 monographs. Or put another way: Almost three works on African American literature by Trudier Harris have appeared in print each year for the last four decades.

If you name a few or ten even somewhat notable African American authors, chances are Harris has written about most, if not, all them. On more than one occasion. She has frequently written about our major writers such as James Baldwin, Zora Neale Hurston, Toni Morrison, Alice Walker, and Richard Wright, and she has also produced works on writers who might not be as widely known such as Alice Childress, Henry Dumas, Tayari Jones, and Randall Kenan.

I was an undergraduate when I first encountered Harris's work -- in the form of a presentation in 1997. I was a student at Tougaloo College in Mississippi; I traveled over to Tuscaloosa, Alabama, to attend the conference "Myth, Memory and Migration: The Black South in the Cultural Imagination" hosted by the University of Alabama's English Department. Harris, Houston Baker, Karla Holloway, Margaret Walker, and my undergrad professor Jerry W. Ward, Jr., were among the featured presenters. Harris gave a talk on Raymond Andrews; aspects of that talk would later appear as an essay in her book South of Tradition (2002).


Back then, in 1997, I was unaware that Harris was -- even then -- one of our most prolific literary scholars. I was equally unaware that I was witnessing one of the most important contributors to the study of Black South literature. I know better now. 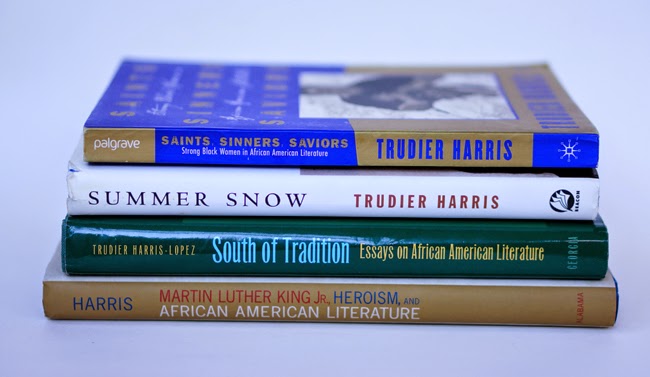 
The mid to late 1980s up through the late 1990s marked a notable moment or series of moments in the formation of African American literary studies. In addition to the many studies of writers and explorations of theoretical approaches, several important resources and "guides" on black literature were published. Consider just a few of Harris's projects during the time period.

There has not been nearly enough conversation about how the resource projects related to African American literature and literary studies produced by Harris and dozens of other scholars between the mid to late-1980s through the late 1990s laid the groundwork for what our field is producing during these early years of the 21st century. 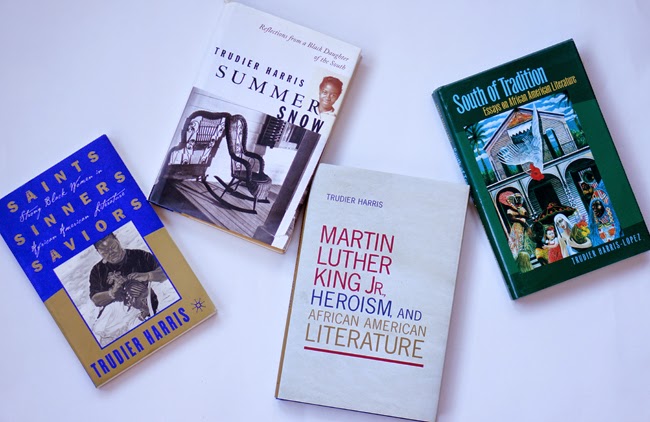 This MLK book solidifies and expands Harris's overall body of work in a few different ways. For one, she indicates how "King fits into African American folk heroic tradition." Consequently, Harris has concentrated on the folk resonances of African American literature and culture for some time in her work. In her recent book, she highlights how, among writers, black heroes are "embraced, shaped, defined, and re-defined to coincide with cultural needs, to highlight long-standing cultural patterns, and to emphasize that ambiguity in heroic construction."

Second, Harris, along with several other scholars, has been working for decades to highlight distinct features of African American literary art. This book advances that objective by showing how the convergence on select subjects, in this case, King addresses one aspect of the question concerning: what's black about black literature?

What drew me to Harris's book was my past research and writing on how black arts poets were inclined to write about Malcolm X and John Coltrane. At the same time, my new, developing projects look at how poets are inspired by bad man figures. The central chapter in Harris's book concentrates on a "pantheon of poetic portrayals of King."

Whereas she is likely most known for her scholarship on fiction writers, Harris demonstrates her interest and knowledge of poetry in this chapter on MLK allusions and references in black poetry. Harris notably traces the different tones and presentations of King in poetry over time:


Poetic responses to the assassination of Martin Luther King Jr. vary from the solemnity of grieving to the anger of retaliation. Some poems exhibit tranquil and controlled tones in their comments on King's death, while others are so angry that the words almost burn the pages on which they are written.

Off the top, the chapter is really useful for helping me think a little more about how the tones of groups of poets addressing a common subject might shift as well as how the evolving perspectives of individual poets change on subjects too. Harris, for example, pinpoints how Nikki Giovanni took different positions on King over time, and how Giovanni ends up excluding at least one of her MLK poems from later, recent reprints of her volumes. 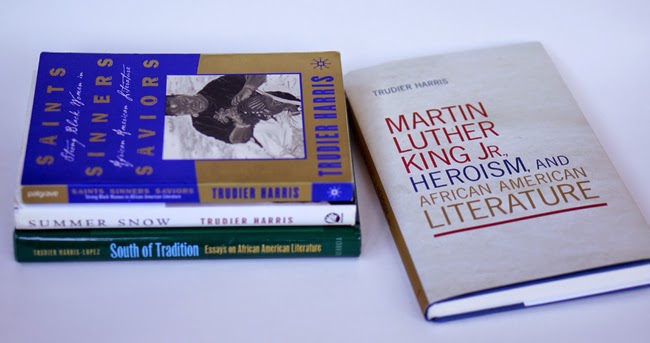 Back in 2000 or so, I was in the audience for a presentation that Harris gave on representations of black women and health in fiction and movies. The presentation was a preview of her book Saints, Sinners, Saviors: Strong Black Women in African American Literature (2001). From that time onward, I have tried to at least keep up with her book publications--South of Tradition: Essays on African American Literature (2002), Summer Snow: Reflections from a Black Daughter of the South (2003), and The Scary Mason-Dixon Line: African American Writers and the South (2009).

Now, I'm enjoying delving into this most recent book, Martin Luther King Jr., Heroism, and African American Literature. Next up, Harris has a forthcoming article on Richard Wright in The CLA Journal, which, given my interests, I'll want to check out. After that, well, I'm sure she'll have something else.