James Smethurst, SOS, and the continuity of black arts scholarship 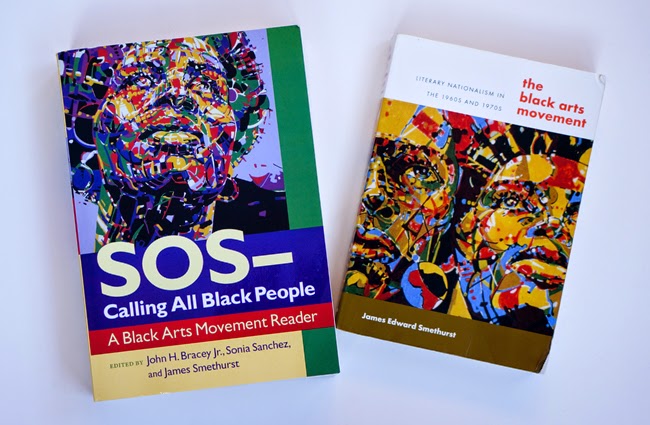 As soon as I saw the cover for SOS--Calling All Black People: A Black Arts Movement Reader (2014), I thought "yooo, I've seen an image like that before on a black arts book." Turns out that Nelson Stevens did the artwork that appears on James Smethurst's Black Arts Movement: Literary Nationalism in the 1960s and 1970s (2005) and for SOS, which Smethurst co-edited with John H. Bracey, Jr. and Sonia Sanchez.

The cover for SOS is from Stevens' Spirit Sister (1972). The cover for Black Arts Movement is from Stevens' Work to Unify African People (1973). It's only fitting to have that continuity running across those two Smethurst projects. After all, Smethurst has been a notable connector for black arts projects for the last several years.

I've been researching and writing about black arts since about 1997. The scholarly work of Jerry W. Ward, Jr., William J. Harris, Eugene B. Redmond, Aldon Nielsen, Tony Bolden, and of course Smethurst have all been central to my initial thoughts on the Black Arts Movement over the last seventeen years.  When my book on black arts was merely a vague, non-materialized idea, Smethurst generously gave me an unpublished chapter of his developing manuscript on black arts.

That was 2001, and I was only  five years into my journey on Amiri Baraka, Nikki Giovanni,  Black World, Broadside Press, Jayne Cortez, Trane, and the like. I had read Drumvoices, but I was still a couple of years away from meeting my faculty mentor, Redmond. Soon, I did meet Bolden, and mainly, beyond published materials, I was drawing on conversations with Ward, Harris, Nielsen, and Keith Gilyard. In retrospect, I was fortunate to have so many direct scholarly connects on a topic that would consume my time and interests over the years.

SOS constitutes yet another contribution to Smethurst's already-impressive projects on black arts and African American literary studies in general. Over the last ten years, we've witnessed the production of black arts-related projects by Evie Shockley, Meta Duewa Jones, Margo Crawford, Keith Leonard, Carte Mathes, and Kathy Lou Schultz among many others. I'm looking forward to where the scholarship and productions will go next.