An Extended Note on A Black Arts Movement Reader 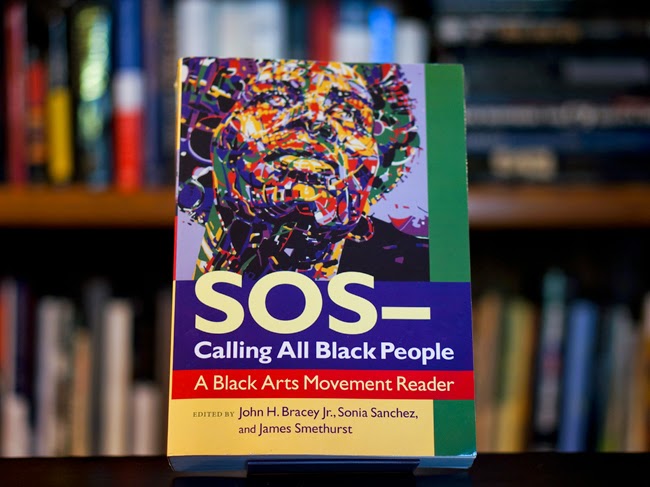 Given my own research and writing interests, I am particularly interested in representations of black arts poetry and poets in the collection. Of course, "poet" is a wonderfully unstable category for black arts figures. Take Eugene B. Redmond for instance.  Is he a poet? Sure. A cultural organizer? Yep, that too. A literary historian? Check Drumvoices. Editor? Check Drumvoice Revue. Photographer? Lord, yes. A collector? Listen: his assortment of rare black and African-authored and autographed books, jazz albums, broadsides, posters, flyers, and images make many university "special collections" seem less special.

All of that to say, my interest in black arts poets means I'm interested in folks who were in fact "poets-plus." Accordingly, black poets-plus makes SOS, published by the University of Massachusetts Press and containing 640 pages, particularly notable to me. The book presents the work of a wide range of black arts contributors as well as up-to-date reflections from the figures commenting on their involvement with artistic culture and activism during the 1960s.

One of the well-known yet sometimes under-appreciated features of black arts discourse is that we have had, for so long, the ability to hear from active, leading participants in the cultural movement. We have also had opportunities to witness so many of those figures evolving over the years. SOS captures literary snapshots of a cultural movement, along with the contributors reflecting on that movement.

The organization of the collection.

After the editors' introduction, there is an essay from 1994 about the Black Arts Movement by the late Amiri Baraka. Notably, the book contains new essays about black arts by Sanchez, Haki Madhubuti, A. B. Spellman, Askia M. Toure, Eugene B. Redmond, Eleanor Traylor, and Val Ward and Francis Ward. The essays, among other attributes, indicate the ongoing contributions of black arts writers well beyond the supposed end of the Black Arts Movement during the 1960s.

The book perhaps presumes some knowledge for readers. There are no biographical sketches of contributors, for instance. Of course in this day and age, all the people included in the collection are google-able. Still, some readers will want standard contributor notes or bio sketches in the actual book.

The anthology's closing essay is Audre Lorde's "Learning from the  60s" from 1982. Throughout the essay, Lorde highlights lessons, hard-won lessons, gained from involvement in and observations of struggles, art, and activism during the 1960s and 1970s.

Some implications of this Black Arts Reader

One of the defining features of the Black Arts Movement was the multi-genre nature of the enterprise. SOS advances that idea by bringing together so many modes of writing from the era as well as the contemporary reflections on what the writers were doing. This collection solidifies the multifaceted, collaborative nature of the movement.

I'm especially pleased with the arrangement of the poetry in the anthology.  The use of sub-sections to highlight those notable threads that comprised poetry of the time period is really helpful for giving readers a sense of the ways distinct topics stimulated poets and how the poets in turn advanced those topics.

The inclusion of reflective essays and commentary by various figures involved in the movement is yet another notable feature of this collection. I found John Bracey's essay toward the end of the collection particularly moving. His essay is filled with gems concerning his processes of "absorbing" black arts writings. "The Black Arts Movement," he notes "was a vital part of the crucible that transformed Negroes into Black people."

Bracey goes on to note that he was "part of the audience that the artists and thinkers sought, one whose head had to be turned around, one of those souls who was called from Negro to Blackness." Somehow in the study of literary art, we almost forget about that "audience," so Bracey's essay is an important reminder that editors, writers, musicians, visual artists, and organizers associated with the movement in general had actual audiences and people and communities in mind. "I heard Amiri Baraka's SOS and that of the other poets, artists, and musicians of that era," writes Bracey. "I was one of the many who responded."

Related:
• A Notebook on SOS: A Black Arts Movement Reader
Posted by H. Rambsy at 3:44 PM