Last year, Kacee Aldridge, who was serving as my graduate student assistant at the time, sent me this map, which she had marked with locations. She and I had been conversing about various sites in East St. Louis, so she wanted to clarify the conversation with a visual. Her map and the notes have been really useful for what I could see and consider. 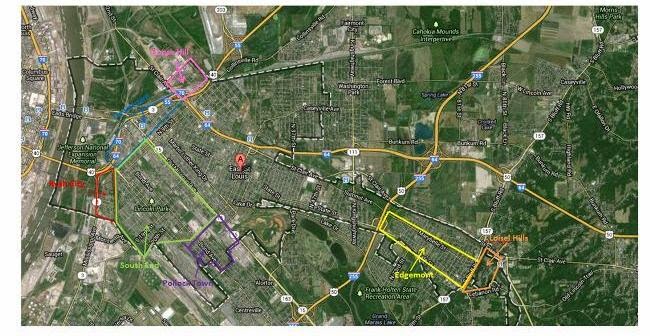 **Loisel Village is encompassed in Edgemont and is difficult to separate. Golden Gardens is not in East St. Louis, it’s near but it’s separately incorporated like Centreville, Alorton, and Sauget.**

Related:
An East St. Louis Sketchbook
Posted by H. Rambsy at 8:11 AM

Golden Garden is Centreville. Parkside and Ping Pong are Centreville as is Church Road area.