Owning the Night: Generations of Black Men in Ferguson 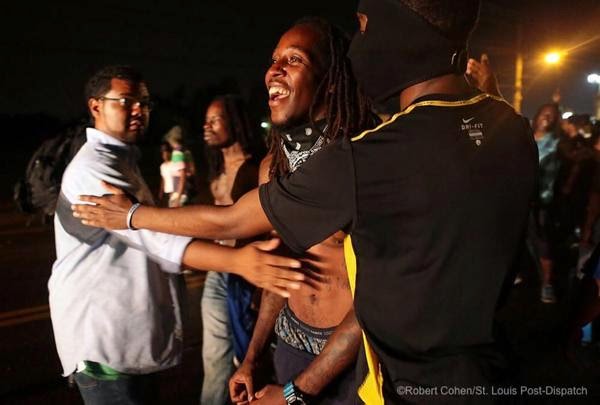 Following the coverage, the images, and the conversations about Ferguson, you'll see and hear about, among other things, different generations of black men on the scene. That becomes even more prevalent really late at night.

If you follow the coverage by someone like St. Louis alderman Antonio French, 36, you'll get a really useful perspective concerning the different generations of black men. French will mention elders, middle-aged black men, and young guys. He'll distinguish between protesters and guys who are being "troublemakers."

You'll notice journalists like Trymaine Lee, Rembert Browne, and others pointing out what different groups of men are doing.  The photographs also give you many different looks at black men. Notably, at night, you'll see countless photographs of shirtless younger guys (17 - 25 or so). In some instance, the shirtless guys are "troublemakers," and in some instances, the guys are protecting the peace, such as a group of shirtless black men preventing looters from breaking into a store.

Governor Jay Nixon inserted a prominent black man into the situation when he had Ron Johnson of the Highway Patrol take over operations in Ferguson. The image of this black man leading the police force and moving easily among the crowd of protesters really changed the tone of things at a pivotal moment.

The photographers and their black men subjects display a really heightened awareness of the importance of black male bodies. Let's not forget that what really incited everyone in the area early on was based on how long the Ferguson police allowed Michael Brown's black body to lie in the street. Seeing Brown's lifeless body was what caused the grassroots to go live.
Posted by H. Rambsy at 11:16 AM