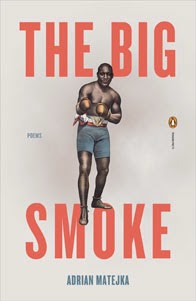 In a 'note to the reader' for Unforgivable Blackness: The Rise and Fall of Jack Johnson, biographer Geoffrey C. Ward points out that newspaper reporters often derisively presented Johnson’s words “in a kind of minstrel dialect no one ever actually used offstage.” In recordings of Johnson’s “actual voice,” explains Ward, Johnson does not even sound remotely like the buffoon the sports pages made him out to be.” In an effort to re-represent Johnson, Ward “restored normal English spelling to whatever Johnson is quoted as having said.”

Adrian Matejka’s The Big Smoke further restores Johnson’s verbal skills by presenting him as a talented storyteller throughout the volume. Part of the enjoyment we've had covering the book this semester emerges from the results of reading the poems out loud and becoming Jack Johnson.

Poems such as "Battle Royal," "Hurt Business," "Fisticuffs," "Sporting Life," and others are wonderful set pieces that showcase Johnson deftly discussing events of his life or his views on a situation. The eloquent speaker whom Matejka presents to us in The Big Smoke is far different, at least on the levels of verbal skill and intellect, than the minstrel figure presented by journalists to audiences in the early 20th century.