Rita Dove and the rise of novel-like, character-driven volumes of poetry 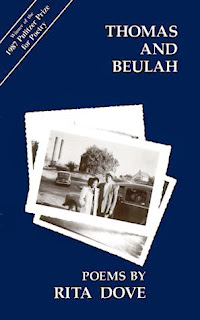 Was it Rita Dove who prompted a couple of now prevalent practices among African American poets? Was it because Dove's Thomas and Beulah (1986) won the Pulitzer in 1987 that large numbers of "new" poets were encouraged to start producing novel-like volumes of poetry and volumes featuring clearly defined central characters?

The focus on a key character in black poetry, at least in the modern era, became more apparent with the publication of Elizabeth Alexander's The Venus Hottentot (1990). She memorably gave voice to a previously silenced, oppressed black woman, and her poem would serve as an important touchstone for poets for years to come.

Certainly, Kevin Young's first volume Most Way Home, which was a National Poetry Series winner in 1993, was influenced by Dove's book. Young's book, which concentrated on presenting aspects of his older relatives and ancestors in the South, seemed to have drawn inspiration from Dove's volume that focused, in part, on presenting the lives of her grandparents.

Then there's Natasha Trethewey. Her first-volume Domestic Work, which presented glimpses of families, was selected by Dove as the first winner of the Cave Canem Poetry prize. Trethewey's second volume Bellocq's Ophelia (2002), based on E.J. Bellocq's photographs of prostitutes, was an even more tightly focused narrative with lead characters.

Cornelius Eady presented a narrative of sorts and definitely a central protagonist in his volume Brutal Imagination (2001) based on the fictive black man whom Susan Smith claimed kidnapped her children.  Marilyn Nelson presented a history in verse of George Washington Carver's life in her volume Carver (2001).

There are really a large number of books that fit this pattern of featuring novel-like plots and/or central characters have appeared in subsequent years. For instance, there's A. Van Jordan M-A-C-N-O-L-I-A  (2004) about the first African American finalist in the National Spelling Bee Competition; Quraysh A. Lansana's They Shall Run (2004) about Harriet Tubman; and Thylias Moss's Slave Moth (2004) about a fictive enslaved woman.

Frank X. Walker wrote Buffalo Dance (2004) and When Winter Come (2008), the first and second parts of histories in verse about York, an enslaved man who traveled on the Lewis and Clark Expedition. Walker also wrote  Issac Murphy I Dedicate This Ride (2010) about a legendary African American jockey as well as Turn Me Loose: The Unghosting of Medgar Evers (2013) about the civil rights worker.

We have Tyehimba Jess's Leadbelly (2005) about the folk musician; Elizabeth Alexander and Marilyn Nelson's Miss Crandall's School for Young Ladies & Little Misses of Color (2007) about a teacher and her students striving for education during during the 1830s;  and Patricia Smith's Blood Dazzler (2008) about Hurricane Katrina. Young's volume Ardency (2012) focused on the Amistad and this past year, we had Adrian Matejka's volume The Big Smoke about the first black heavyweight champion Jack Johnson.

There's obviously considerable distance between Matejka's The Big Smoke and Dove's Thomas and Beulah, but those works are linked by a long line of novel-like and character-drive volumes.
Posted by H. Rambsy at 9:18 AM