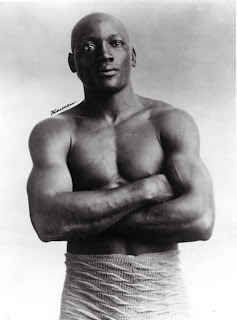 Earlier this semester, I told the guys that we'd select a few poems we were reading, memorize them, and then present them in front of the class. I gave them the option of learning various poems, but somehow, the majority of the class landed on Adrian Matejka's "Sporting Life" from The Big Smoke.

In some respects, the poem is a "found poem," as Matejka draws on Jack Johnson's remarks to a reporter. Johnson was resisting the idea that he over worry about the dangers of the life he was living. Matejka's poem opens


People always talking about if
& suppose like those words are worth
more than money, more than the crease
a silk stocking makes on a woman’s

thigh. More than the grumble of a Thomas
Flyer engine. So I take the side of my
pleasures.

The bad, confident talk of Matejka's Jack Johnson impressed us, so we committed to learning the piece. In retrospect,  I now realize that Johnson's attitude resembled the rappers and ball players that the guys know so well from popular culture.

The first time guys attempted to read the poem from memory in front of the class didn't go so well. Dudes were reading in a stilted manner that would've had Matejka and especially Johnson shaking their heads in shame.

But finally, one of the guys led the breakthrough. Before reading, he leaned on a wall in the front of the room and crossed his arms. The idea was that you had to be cool while channeling the spirit of Jack Johnson. The whole room laughed out loud at their classmate's gestures and then erupted louder with applause after he made his way through the poem.

After that, if you didn't read the poem with some Johnson-ian flare for coolness and confidence, then the verdict in the class at least was that you weren't really reading.