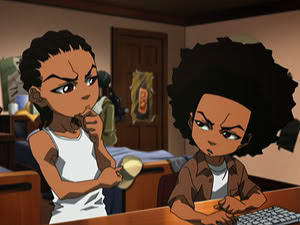 
Riley: Gangstalicious got shot.
Robert 'Granddad' Freeman: Again?
Riley: We got to do somethin'!
Huey: I got an idea - why don't we go to college so we don't end up like Gangstalicious?


This exchange occurs in the Boondocks Season One episode entitled “The Story of Gangstalicious.” In the episode, Riley looks up to rapper Gangstalicious and is distraught when he is shot and hospitalized. This scene summarizes Huey’s entire view on the situation and serves as an exemplary instance of Huey’s keen and humorous intellect.

At ten, children are normally in a stage where they base their futures on role models whether they are negative or positive. Huey is well above this level of thinking already being able to distinguish between positive and negative influences. His observation shows a more future-oriented level of thinking, as well as an understanding of how actions in the present effect future aspirations.

Here McGruder is trying to emphasize the importance of youth avoiding negative role models. He highlights how the media’s portrayal of these negative role models influences young minds, which inevitably leads to future failures. He also proposes that education is key in avoiding a future filled with downfalls and tragedy.

Demetrius Coleman is an English major at SIUE and serving as a contributing writer for the Cultural Front this semester.
Posted by H. Rambsy at 12:18 PM