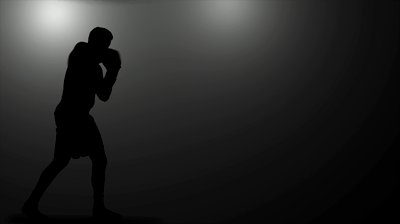 One of the innovating, intriguing features of Adrian Matejka's volume on Jack Johnson The Big Smoke is his series of "shadow boxing" poems. In those pieces, Matejka speaks in the voice of Johnson's shadow, who talks back to, critiques, and even ridicules the first black heavyweight champion. Who else could challenge the larger than life Johnson but his equally larger than life shadow?

According to Matejka, during the time that he was composing the collection, he became concerned that his manuscript did not have enough speakers. In addition to having Johnson's perspective, Matejka also added persona poems told from the point of view of Johnson's wife Etta Duryea as well as Johnson's mistresses, Hattie McClay and Belle Schreiber. Still, he was unsatisfied, noting that "there was still an absence of emotional awareness—or maybe better, emotional honesty—from the voice of Johnson himself in the book."

At some point Matejka shared his dilemma with poet Marilyn Nelson, and she suggested composing poems where Johnson's shadow speaks.  According to Matejka, Nelson "gave me the idea—literally, she said: 'You can have this idea' ... a poem in which a character talks to his or her shadow." So, Nelson provided the idea, and Matejka gave shape and voice to, well, the shadow.

The series of "shadow" poems adds something special to Matejka's book. Only that shadow can get inside Johnson's head and really take him to task on his inner-most thoughts. For instance, although many observers (including me) are inclined to compliment Johnson on his extensive knowledge of literature, the shadow is not so impressed: "You're not fooling me / by quoting Shakespeare, / Mr. Champion of the Negro / World."

The shadow makes appearances in each of the four main sections of The Big Smoke and thus serving as an integral piece of the overall book. I imagine that poets share with fellow poets all the time. In this case, I'm thankful Nelson passed along this good idea to Matejka and that he was able to do something so creative with it.