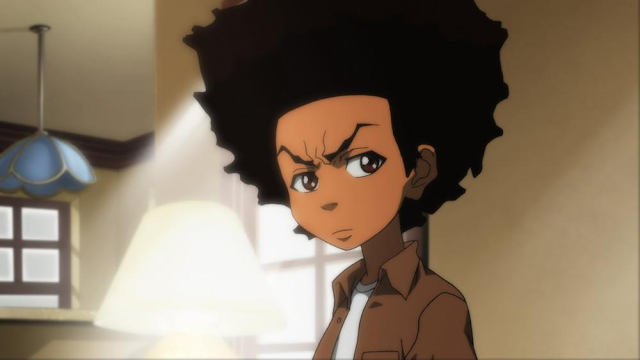 My first point of interest into The Boondocks was the portrayal of children with such high intelligence levels. Both Huey (10) and Riley (8) are depicted with an intelligence that surpasses that of some adults in today’s society.

The pilot episode "The Garden Party” immediately begins with Huey dreaming of being at a party where he insights a riot by voicing his opinions on Jesus, Ronald Reagan and the government. Religion, politicians, and governmental conspiracies are not what one would typically associate with the knowledge of children.

There was also the conversation between Huey, Riley and Robert (Granddad), where Robert forces the boys to a predominantly white party where he wants them to portray a facade to impress the "new white man." Upon their refusal, Granddad then attempts guilt by referencing being hosed and chased by dogs during the civil rights movement.

Huey’s retaliation once again shows his high level of intelligence. "Were you attacked? It’s like the whole generation tries to take credit for what happened to some people." Huey’s comments demonstrated his keen ability to undermine false narratives offered by adults.

The portrayal of a black child with such a high level of intelligence is a statement about the deficits of his surroundings. In addition, the presentation of a smart black boy also allows McGruder to oppose those pervasive cultural stereotypes that often portray African Americans as lacking intelligence.
Posted by H. Rambsy at 11:32 AM