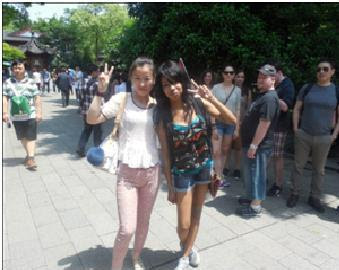 Since coming to China I, like a lot of the other American students here, have gotten a lot of glares from the people who live here. Since China is a very homogeneous society, foreigners stick out very easily. But for me, there is a slightly greater extreme.

I am the only African American student on the trip.

So I am spotted a bit easier in this overcrowded city of Hangzhou. The Chinese (like most other Asian cultures) pride themselves on having extremely pale skin. Just like in the African American culture where lighter skin was a signifier of class, the same concept pertains to most Asian cultures.

Therefore, I can’t help but wonder if when they look at me they see “low class” or whatever the media portrayal of African Americans is here. I try to avoid going out alone because at times the stares become too much for me and cause me to feel uncomfortable.

Others see me as a bit of a novelty. I’ve encountered individuals who wanted to take pictures with me and others who think that my “tan” looks nice. Either way, I don’t mind the attention that I get here when I am in a group. Sometimes, I suppose, the attention has allowed me to make new friends.

Related:
Jennifer Johnson's Travels in China Notebook
Posted by H. Rambsy at 8:33 AM