Marking up Paul Laurence Dunbar's "We Wear the Mask"

I had a good time working with the six Fellows in the African American Literatures and Cultures Institute yesterday. In particular, I enjoyed the opportunity to talk about and primarily witness the Fellows discussing and marking up Paul Laurence Dunbar's "We Wear the Mask." Corey Reed from Morehouse College and Kevin Morris from the University of Arkansas led our discussion, and they began by writing Dunbar's poem on the white board.

From there, they took questions and made comments about the poem, marking it up with underlines, double underlines, circles, arrows, and notes on the side. What an old-school yet novel way to work with a poem. Thinking about a poem in a book or on an individual handout is one thing. Thinking about a poem that's written on the board receiving mark ups based on the discussion is something esle. 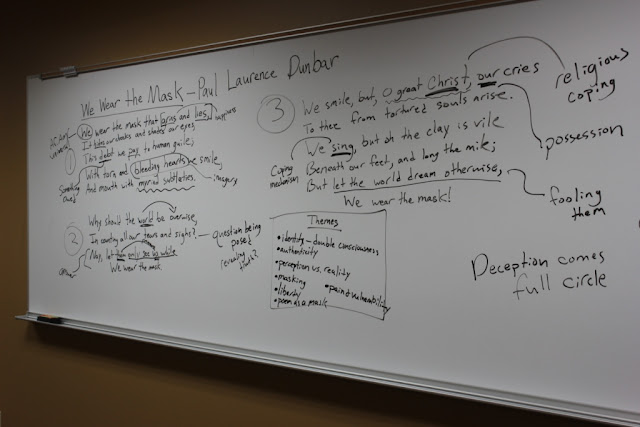 The use of mark-ups are one way to engage and sketch out responses to a poem. Maybe it's a lost or declining art since people increasingly view materials on digital devices and really before that, large numbers of people were understandably reluctant to place markings on poems in their books. But seeing what individual words and lines that a group of people are interested in concerning a poem and  then thinking about those words as a whole together can stimulate even more interest in a piece.

There's something about the aesthetics of a poem written on a board too that can make even an old and familiar one like Dunbar's"We Wear the Mask" new. For years and years, I've seen the poem in books and on printouts. Seeing the poem written largely on the board gave the piece an almost public art feel, which even beyond the poem, gave me all kinds of new ideas.  .