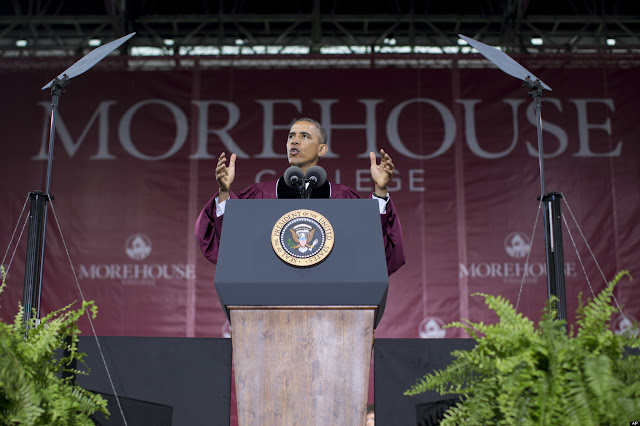 For these reasons and other reasons, Morehouse is winning. Big.

Despite the different takes and assessments concerning President Barack Obama's speech, a university stands to gain considerable cultural and social capital by serving as the venue for an event that received such extensive coverage. Colleges and universities compete and lobby to host high-profile speakers in large part because of how it might raise their visible and institutional brand.

Countless talented high school black men are going to strongly consider attending Morehouse as a  result of the attention the school received based on Obama's speech on the campus. A college that hosts a sitting president has to be important, so goes the thinking of potential students and their families, right? After all, the last time a sitting president gave the commencement address in the state of Georgia was in 1938 when Franklin D. Roosevelt spoke at the University of Georgia.

Just as important, university officials at Morehouse will benefit in their fundraising efforts based on Obama's visit. Alumni of the institution are more likely to give based on the extensive coverage their university has received based on the visit, and new, potential donors are now more likely to contribute generously to the college.

Finally, on the ground-level, those of us who attended HBCUs have longstanding, friendly rivalries with each other about our respective institutions. The Obama visit and subsequent coverage has given Morehouse College a serious advantage. No doubt, they winning.