A Journey to Queensbridge 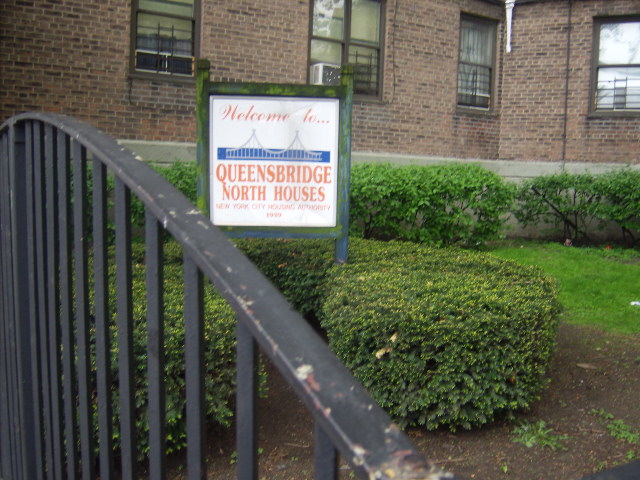 May 5-8, 2013 marked my third consecutive year of traveling with our crew from Black Studies to NYC. This year I had the opportunity to travel to regular sites as well as new ones. On my last day, however, I decided to make a special visit to Queensbridge.

Located in Long Island City, Queens, Queensbridge Houses is one of the largest public housing development in the state of New York and the United States in general. Queensbridge was once home to a number of prominent residents including rappers like Nas, Bravehearts, Capone-N-Noreaga, music producer Marley Marl, MC Shan, Craig G of the Juice Crew, Roxanne Shante, and Havoc and Prodigy of the hip hop duo Mobb Deep. Other notable residents include writer and filmmaker Julie Dash and NBA player Metta World Peace (formerly Ron Artest) of the L.A. Lakers.

What makes Queensbridge notable is its presence as a site where Hip Hop music and culture developed and flourished in the 1980s and 1990s into the present and the fact that it is perhaps one of the better-documented geographic spaces in terms of Hip Hop history in New York. For example, it was Queensbridge’s own Marley Marl and MC Shan’s “The Bridge” that instigated one of the most important Hip Hop rivalries or beefs, The Bridge Wars with South Bronx’s KRS-One and Boogie Down Productions over the birthplace of Hip Hop.

Since his debut in 1994, Nas has documented Queensbridge life through his lyrics and vivid storytelling abilities, and he also introduced listeners to his childhood home through fashion as he sported his infamous QB chain and most importantly Queensbridge has been a background image on his album covers from Illmatic (1994) to Nastradamus (1999). As a graduate student of history and museum studies, I have to credit Nas for being one of Hip Hop’s greatest historians because he gives detailed cultural cues such as streets, landmarks, dates and often documents historic and unsung heroes. On Life is Good (2012), Nas reflects on his life and coming of age in songs like “A Queens Story” and “Back When,” which contains a sample of “The Bridge.”

When I think of Hip Hop and Queensbridge, I think of it as a testament to historical memory. In defining and preserving memories, it’s not just about what and who is remembered, but how things and people are remembered and documented. Obviously, my experience was brief and could never compare to the stories and experiences of rappers like Nas or the people who still inhabit Queensbridge, but visiting was my way of paying homage and also bearing witness to one of the physical locales where hip hop took root.