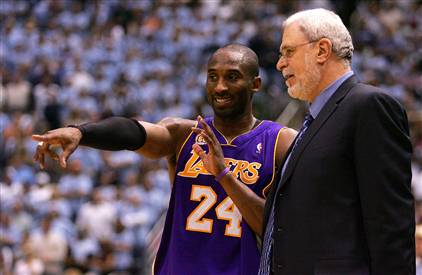 Twitter is an interesting tool. On one hand, the 140 character limit promotes immediate shallow, often thoughtless commentary. On the other hand, it forces an individual to concentrate a thought, or in the case of Kobe Bryant, a personality into the tiniest of spaces.

This is why Kobe’s twitter post late last week following his season-ending Achilles injury was – if not a revelation – a verification of all that is the Black Mamba. On Monday, Bryant tweeted “Can’t move for 2 weeks so I’m laid up. Will watch game on TV and give adjustments if needed by phone at halftime #countontheteam” The hashtag should read #countonthemamba, as Bryant’s tweet reaffirms his own confidence (arrogance?) and importance to the team, not only as a player but as a coach.

Put yourself in Mike D’Antoni’s shoes: Are you offended when a player doesn’t find you competent enough to make halftime adjustments? Does it matter that this player is one of the greatest offensive players of all time? What if this player spent his entire career learning from the GOAT (Greatest Of All Time), the Zen master Phil Jackson.

Phil’s resume is slightly ridiculous. 11 championships (most all-time) in just 20 years of coaching, an all-time record of 1155-485 (win percentage of .704, highest of all-time), and a .688 win percentage in the playoffs. Jackson never had a losing season as a head coach and never failed to make the playoffs.

Despite their differences, highlighted in Jackson’s 2005 book “The Last Season,” Kobe and Phil built a monumentally productive bond, winning five championships together and transforming Kobe from a brash, selfish rookie to a polished veteran ambassador and future coach. Kobe has turned to Zen, the philosophy of Jackson, as a means of overcoming the many obstacles in his career, from injuries to media turmoil and plans to pass this mentality onto his teammates while sidelined. Scoot over Mike D’Antoni, there’s a new coach in town. #CoachMamba

Related:
The Basketball Project
Posted by H. Rambsy at 5:02 PM