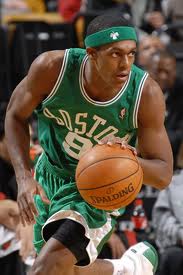 June 28, 2006 – Rondo forgoes his final two seasons at Kentucky and is drafted 21st overall in the 2006 NBA draft by the Pheonix Suns, and is immediately traded to the Boston Celtics. Rondo is the first point guard chosen in a deep class of forwards and centers.

January 20, 2007 – Rondo records his first Double-Double, pulling in 10 boards along with 10 points against the Washington Wizards, verifying his promise as a rebounding guard.

February 2, 2007 – In his first career start Rondo scores 23 points, dishes 6 assists, grabs 6 rebounds, and swipes 4 steals in 43 minutes worth of work, showing the promise of both his stamina and complete game potential.

December 3, 2008 – Rondo records his first career triple-double against Indiana. Follows immediately with a second Triple-Double in Dallas on February 12, 2009.

May 9, 2010 – Rondo leads the Boston Celtics to a Game 4 conference semifinals victory against the LeBron James-led Cleveland Cavaliers. Rondo leads the team in points (29), rebounds (18), and assists (13).

October 30, 2010 – Rajon Rondo dishes a career high 24 assists to go with 10 points and 10 boards for his 7th career triple-double and a tie for the all-time record for assists in a triple-double game.

January 27, 2013 – Rajon Rondo tears his ACL in a game against the Miami Heat and is forced to sit out the rest of the season with the injury.

Related:
• The Basketball Project
Posted by H. Rambsy at 3:45 PM