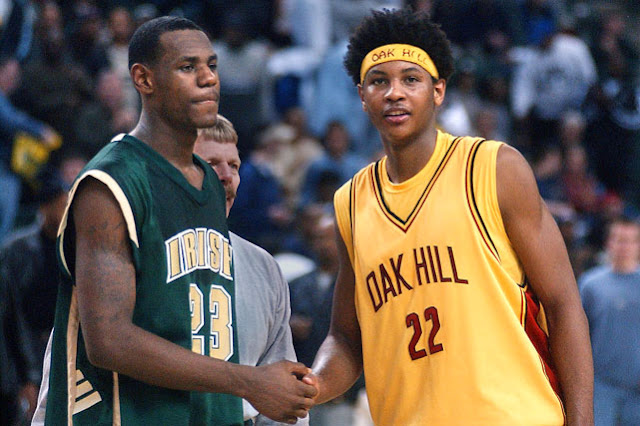 Look at the careers of the top five picks in the 2003 NBA draft (listed below in the timeline) and it’s hard not to think the ’03 draft class is one of the best in recent history. The players from this draft have appeared in a combined 37 All-Star games, and the top-5 picks have combined for 9 NBA Finals appearances in five different years. Oh yeah, and they can flat-out score: LeBron is Cleveland’s all-time leading scorer (15,251 points), Wade leads the Heat’s all-time scorers (16,300 points and counting), and Carmelo is third on Denver’s all-time scoring list (12,711 points).

When we pause to add up the accolades these stars have accumulated through the past ten years, we should count our blessings and appreciate the incredibly high level of basketball of this generation. At the same time, I can’t help but think how funny the Darko pick looks in retrospect. Other notable picks from the ’03 draft include Nick Collison (12th), David West (18th), Kendrick Perkins (27th), Leandro Barbosa (28th), Zaza Pachulia (42nd), Mo Williams (47th), and Kyle Korver (51st).

May 2007: LeBron James leads the Cavaliers to the NBA finals and his first career Finals appearance.

Summer 2008: The “Redeem Team” (including Wade, Bosh, James, and Anthony) win the Olympics Gold Medal. At the Olympics, “the big 3” allegedly made a pact to play together when their contracts expired in 2010.

November 2009: Carmelo Anthony (still on the Denver Nuggets) drops 50 against the Knicks.

Summer 2010: Miami trades for Bosh and James. This includes the infamous ESPN special, “The Decision,” and the Heat’s (also infamous) welcome party.

November 2012: Darko Milicic steps away from the NBA after 10 years. He finished with a career average of 6.0 points and 4.2 rebounds. Good call, Detroit.

March 27, 2013: Miami Heat lose for the first time since Feb. 1, ending a 27-game win streak (2nd best in NBA history). The team looks poised for a second straight championship, and people are starting to ask where they rank among the greatest teams of all time.

Related:
• The Basketball Project
Posted by H. Rambsy at 3:34 PM