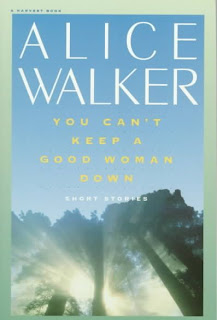 An inexperienced, young, black woman character confesses to murdering a white man in Alice Walker’s short story, "How Did I Get Away with Killing One of the Biggest Lawyers in the State? It was Easy" from her collection You Can't Keep a Good Woman Down (1981). At sixteen, the unnamed black woman casually describes how she murdered her lover of two years and watches his children so that his wife can attend his funeral.

She recalls that she was “fourteen” when “he began to touch me [her]” and “raped me [her]” before he coaxed her into believing that “he hadn’t forced me [her]” and gave her money. Brainwashed into believing her mother was insane for disagreeing with their affair because his father says “folks like us ain’t even human,” Bubba—the white lover—tricks the narrator into signing a paper to “admit my [her] mother into Carthage Insane Asylum.” Her mother died there, and she—the narrator— “killed Bubba.”

Coolly, she took the gun out of his desk and “shot him while he was wearing his thick winter overcoat,” left the gun at the scene and “didn’t take the time to wipe off the fingerprints.” She had also “stolen all that money Bubba kept in his safe,”—because she said her would send her to college anyway—and the next week sat “on his wife’s bed with his children, eating fried chicken his wife, Julie had cooked” as she went to her husband’s funeral. The unnamed black woman character has no signs of remorse, how cold!

Sitting in the bed she and her lover once occupied, watching his children, while eating the chicken his wife had cooked, with an air of indifference, the nameless narrator remains unapologetic.

Walker’s short story is an extension of my work on the uncanny. That the woman left the gun at the scene and stays in the neighborhood after she has killed her lover and stolen his money seems strange and unusual. Like the uncanny black women characters I've considered in works by Octavia Butler and Toni Morrison, Walker's protagonist defies our typical expectations.

********
Briana Whiteside is a graduate student in English at SIUE and a contributing writer for the Black Studies Program.
Posted by H. Rambsy at 12:37 PM