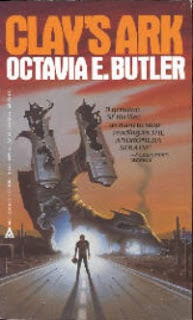 Equipped with Butler’s expertise for storytelling, Clay’s Ark (1984) is nothing more than a cliché science fiction tale of alien abduction and fantasy filled heavily with sexual undertones. The third book of The Patternist series, Clay’s Ark is by far my least favorite book, and I am not sure why the story needed to be told.

As an extraterrestrial zombie story, Butler presents an alternative view of life if people contracted a disease—the clay’s ark disease—that made them inhuman but not necessarily superhuman. Clay’s Ark is the story of Eli who was once a geologist and astronaut who returned from a space mission carrying an alien disease in his body, which made him faster and sharpened his senses. Once Eli comes back to earth, he needs to infect others in order to survive, but restricts the new hosts from infecting others outside the desert, for the fear that it will cause an epidemic. In order to survive, the new hosts must infect and reinfect people, and Eli’s restrictions don’t really make much sense!

The organisms living within their bodies cause them to have compulsions that urge them to participate in acts of rape, incest, and even murder. They have the ability to reproduce humanlike children “who move seductively like cats” and live as an isolated group in the desert. So, why does Eli’s story need to be told?

Butler’s decision to include a man’s story into The Patternist series seems odd and out of place. Eli’s story falls flat compared to Anyanwu’s shape shifting from Wild Seed and Mary’s mental strength from Mind of My Mind. He lacks astonishing capabilities, unusual talents, and ultimately blends in with the other characters in the story.

Although Butler’s new spin on the old plot of alien abduction to rewire genetic makeup is noteworthy, the story travels on a straight and narrow path, with a predictable and unsatisfying end. If this had been Butler’s first book, it might have been an acceptable read; however, Butler has set the bar so high from her previous works, that it is clear to recognize when one work doesn’t uphold the standards of the bar.