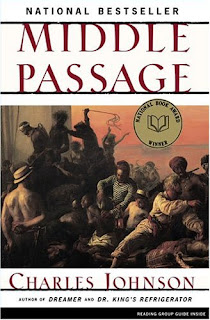 Charles Johnson’s Middle Passage (1990) tells the story of Rutherford Calhoun—an ex-slave who in an attempt to escape a blackmailed marriage arrangement, hides on a ships as a stowaway. It is not until hours later, that he discovers that the ship is not any regular ship leaving New Orleans, but the Republic—a slave ship. As the only Negro in the crew, Calhoun struggles between his alliance with his shipmates and the enslaved members of the African tribe the Allmuseri.

Although Johnson’s book is slow to unravel, his novel proves to be an important work in African American literature. It explores the complexities of well-known black men owning slaves—which seems to be the ultimate betrayal—while uncovering the tensions between American and African, as well as the relationship of power and vulnerability. Calhoun had been freed by his former master as a teen, only to become a slave to the revolted Allmuseri tribe after they overthrew the captain and his crew. His situation is further complicated as he plays both sides—giving the key to the shackles to a slave to free his men, and plotting with the crew members to poison the estranged captain.

One by one, the surviving crew members and Allmuseri must depend on one another to survive—literally by turning to cannibalism.  As the ship sinks, Calhoun finds himself yearning for home in New Orleans where he might face injustices that he once sought to escape. Surprisingly, he and three others are rescued and brought on board another ship, where he is forced to face Papa—a black man who buys slaves, and the very person who forced Calhoun to run away. This important moment of self-discovery, bravery, and new found love for a woman he once despised has shed a new light on what it means to be a fatherless black man committed to changing the course of an unfair life.

Johnson’s neo-slave narrative Middle Passage is a contemporary classic that provides an alternative on the irony of being presumed as a free man and actually being freed.

********
Briana Whiteside is a graduate student in English at SIUE and a contributing writer for the Black Studies Program.
Posted by H. Rambsy at 10:07 PM