Kevin Durant, Kinship, and the 2007 Draft 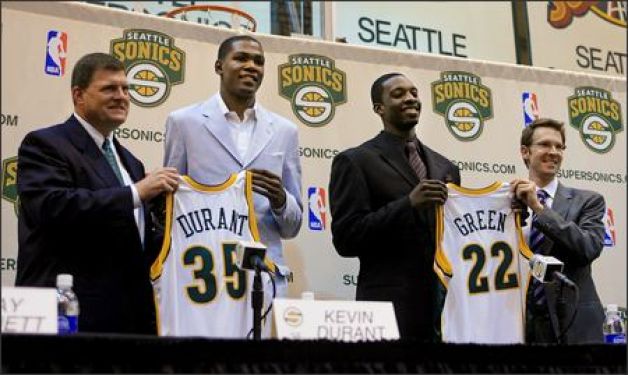 If the Spurs benefited after the 1997 draft from an organic kinship between Tim Duncan and David Robinson, the Oklahoma City Thunder are enjoying similar benefits from the same home-grown approach to building an elite team. On the far right in the picture above, Thunder (then SuperSonics) General Manager Sam Presti smiles big after drafting Kevin Durant second overall in the 2007 draft and trading for Jeff Green (drafted fifth overall). Of course, we all know that Presti drafted Russell Westbrook fourth overall the following summer with hopes of forging a close bond between his young stars; in other words, Presti put everything in place for a kinship to develop between Durant, Green, and Westbrook.

Not surprisingly, Presti worked his way up the San Antonio Spurs’ organization before becoming GM with the Thunder and drafting Durant in the summer of 2007. As I explained last week, the Spurs understand the advantage of kinship; Presti brought this wisdom to the Thunder, but the results took time. As happy as the two young stars look in this photo, they didn’t smile much in their first season (20-62) with the SuperSonics or their second season (23-59) as the Oklahoma City Thunder.

It is likely that Presti is smiling in this press conference because he knew that success would come when the kinship matured. Just as Durant’s scrawny frame took time to fill out, the team’s bond has grown strong over the past five years and helped them win the division in 2011 and the Western Conference championship last season. ESPN recently asked Durant about his unique pairing with Westbrook in comparison to other duos, like Paul-Griffin and Wade-LeBron, to which Durant emphasized the distinction that he and Westbrook were drafted to the same team (noting Sam Presti’s inside-out approach where the team is family – the players are like kin).

Related:
• The Basketball Project
Posted by H. Rambsy at 8:42 PM