Books by Allison Joseph & Tony Medina converse together about dads 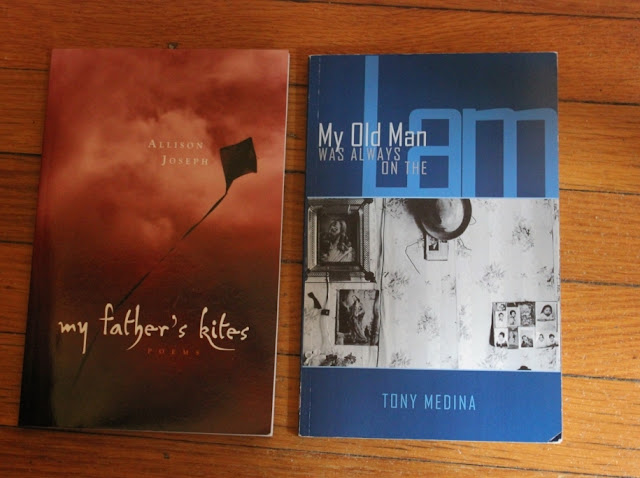 I'm not sure whether Allison Joseph and Tony Medina know each other. Nonetheless, volumes of their poetry are in close proximity on my bookshelf, and they converse with each other all the time. Joseph's volume my father's kites and Medina's My Old Man Was Always On The Lam were both released in 2010, and perhaps because my mind moves slower than a turtle at times, I somehow never put enough thought into the links between their two works until last week.

I was, as always it seems, rearranging the volumes in my poetry collection on the bookcase, and at one point, Joseph's book was sitting next to Medina's. "What the...?" I asked myself when the thought clicked that I had never pointed out the connections between these two works that both include several works about the poets' deceased fathers. I went to check one of my online lists of volumes, and--how about that?--I had already placed the works together in my 2010 section.

You get the sense while reading Joseph's and Medina's poems that their dads were some fascinating, to say the least, kinds of dudes. Joseph's dad "loved designer suits," had "Gold cufflinks, tie tacks, slim silver pens to sign the flourish of his signature," and he would "shun / the plain, clothes other men saw fit to choose." Folks were inclined to talk about Medina's dad "like he was Stagolee or Shine," thus linking him to two of our most known and revered "bad" men.

Usually when we talk about fathers and poetry, we mention one poem here and there, and we certainly note Robert Hayden's well-known "Those Winter Sundays." Medina and Joseph slightly expand that conversation. Medina's volume has several poems about his father, and Joseph's book contains a sequence of thirty-four sonnets featuring her father. At least among the 300 or so volumes of poetry in my collection, Medina's and Joseph's books are, together, unique in their extended poetic treatments of fathers.

More extensively than others, Joseph and Medina demonstrate the idea of black fathers as poetic muses. Thus, when placed near each other on the shelf, my father's kites and My Old Man Was Always On The Lam have much to say to one another.