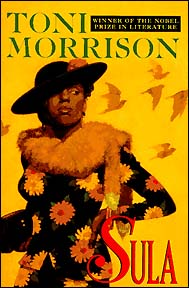 Sula Peace, the protagonist of Toni Morrison’s Sula (1973) grew up in a “wooly house, where all sorts of people dropped in; and dirty dishes left for hours at a time in the sink.” Where the “Peace women simply loved maleness for its own sake.” Morrison introduces Sula as “a heavy brown with large quiet eyes, one of which featured a birthmark shaped like a stemmed rose” that “grew darker as the years passed.”

There is one key scene where Sula attempts to protect herself and Nel against a group of boys that readers notice that Sula is an unusual character. “She squatted down in the dirt road and put everything down on the ground. Holding her knife in her right hand, she pulled the slate toward her and pressed her left forefinger down hard on its edge. She slashed off only the tip of her finger.” She then says, “if I can do that to myself, what you suppose I’ll do to you?”

This scene is uncomfortable because Sula casually and quietly mutilates herself. Her calm manner, blank stare, and boldness of character draws attention to Sula’s unusual character. Nel and Sula quietly walk away from the boys with Sula’s face “looking miles and miles away.”

Another scene where Sula displays mysterious actions is when her mother dies in a fire. “Sula had watched Hannah [her mother] burn not because she was paralyzed” by fear, Sula witnesses her mother dying in a fire, and she is, of all things, “interested”? How strange!

Sula’s presence caused a man who “sucked on chicken bones” for thirteen years to “choke and die on the spot,” a mother who neglected her son to become a “devoted mother: sober, clean, and industrious,” and a sty to grow on a woman’s eye who “ain’t never had no sty before.” Her mysterious powers, unacceptable actions and unusual presence in the Bottom—her home town—labels Sula as an eerie black woman character.


********
Briana Whiteside is a graduate student in English at SIUE and a contributing writer for the Black Studies Program.
Posted by H. Rambsy at 8:31 AM