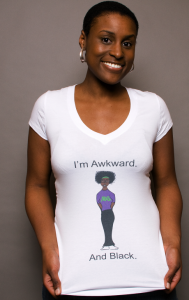 Folks may know Issa Rae as the star of the award-winning internet series “Awkward Black Girl” (ABG). The show, Rae’s brainchild, chronicles the misadventures of the black woman protagonist at her miserable job and in her corky relationships. From its inception in 2011, the show has gained a substantial following of fans who return to Youtube bi-weekly to keep track of just how awkward life can be. Because of a few strategic moves, Rae’s legacy will be anything but awkward.

As we look back on the ruler of the ABG empire one day, something she’ll be remembered for is her business-savvy. Her strategic marketing has successfully allowed Rae to launch a merchandise line with ABG branding from www.awkwardblackgirl.com. Not only can her loyal fans publicly represent ABG by rocking screen tees with clever sayings but also wristbands and logo decals. They can even purchase MP3s of the show’s original parody-style music, which Rae also performed. Like many current megastars, her main job won’t be the only job as marketing plans will have positioned Rae to build her brand well beyond the show.

Rae acts but will also be known as a producer, director, and writer; all of which afford her creative control over her projects. When she’s not working on ABG, Rae produces “Roomieloverfriends” and “The F Word” webseries. With her “RATCHETPIECE Theatre” vlogs, Rae brings together popular culture, black music, and critical and comedic commentary in such a way that one day envisions her in her own network production, like VH1’s “Best Week Ever” or Nuvo’s “Latino 101.” This idea isn’t too farfetched considering that Rae recently partnered with TV powerhouse Shonda Rhimes (creator of “Grey’s Anatomy,” “Private Practice,” and “Scandal”) to create and write an ABC pilot.

No doubt, Issa Rae is taking the world by storm. In the future, we will look back at her impressive body of work and see how she grew from an awkward black girl on Youtube into one powerful business and media mogul.

********
Cindy Lyles is a program coordinator and contributing writer for Black Studies @ SIUE.
Posted by H. Rambsy at 7:45 AM