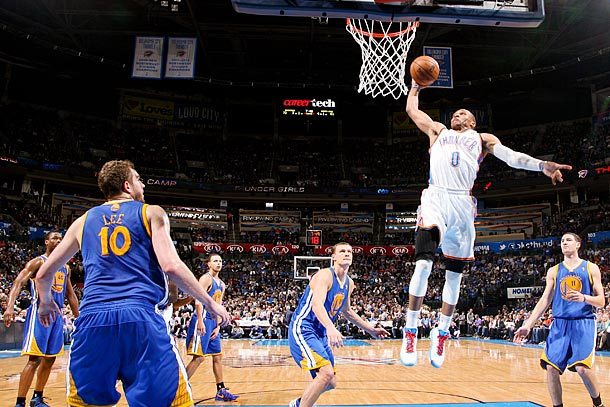 With Westbrook soaring to the rim like that, I’m on the edge of my seat ready to yell “ohhhhhhh!” – twisting back in my chair, and contorting my face like I feel bad for the Warriors (as if I really feel bad for the Warriors). The thing is, even though I know that “ohhh!” moment is coming, I can’t help but react like that because of the way Westbrook dunks the basketball. He may be relatively small on the court, but Westbrook has figured out how to make his dunks look big: he rises up, cocks his arm back, puffs out his chest, and throws down the ball like a sledgehammer.

Westbrook always looks a little bit like a superhero when he’s on the court, with his chiseled biceps and shoulders and his wide, glaring eyes, but I love this picture, specifically, because you can see how those characteristics are intensified when he dunks. With his eyes-popping, muscles-bulging, left-arm extending, and chest puffing, he’s wound up and ready to throw it down. Westbrook is at the peak of his jump in this image, and he’s ready to conclude his display of physical prowess with a ferocious and demanding throwdown.

Perhaps what I like most about this dunk (because I’m a small guy too) is that he has to reach so high. From this angle, it might appear as if Westbrook’s hand is far above the rim, but notice that his eyes are looking up, reminding us how short he is and surprising us – again – at how high he jumps. In this image, we, along with the Golden State Warriors, take a moment to appreciate the athletic and aesthetic power of Russell Westbrook.