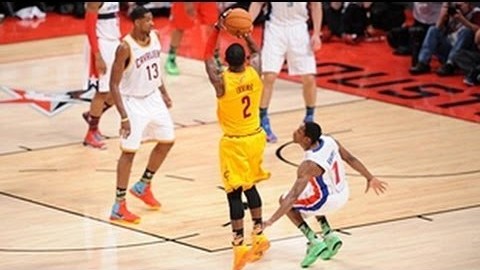 African American poetry carries an oral tradition of “toasts," verbal assertions of dominance and skill. The toasts are often playful, yet carry power in their presentation and talent level – as seen in Nikki Giovani’s “Ego Tripping” and in the lyricism of a more contemporary poet, Sean Carter. What a toast is to poetry, the crossover is to basketball, and Kyrie Irving is quite the creative writer.

The image is homage to Irving’s dribbling prowess; it was taken right after Kyrie mercilessly broke down his defender. Notice Brandon Knight’s twisted body facing the far sideline rather than his match-up; look at his hands reaching out to catch himself on the floor, not to defend Irving’s silky shot. As Knight falls to the floor, contorted and shaken, Kyrie lifts perfectly off the ground, shoulders squared in the confidence that comes with shooting prowess.

It might not be a verbal boast, but Irving’s crossover on Knight says everything we need to know about respect and the position of the two in the hierarchy of professional hoops. As young players, Kyrie is quickly elevating while Brandon Knight and his lime green kicks are sitting on the floor, looking foolish and inexperienced. Much like Jordan’s defining images, this photo reminds us of Irving’s destructive abilities and is symbolic of his status as one of the best young point guards in the game.