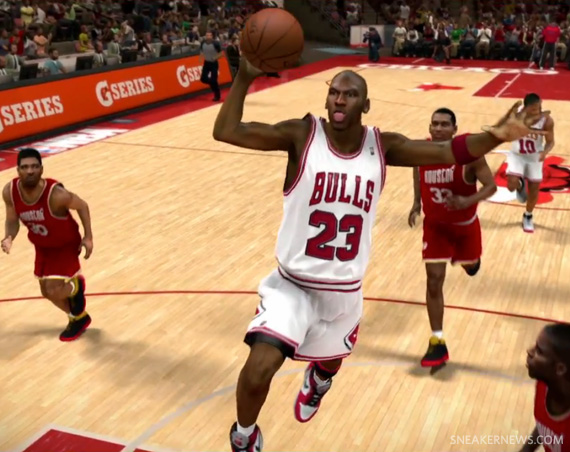 The cover says it all. Michael Jordan and his trademark 23 jersey explode out of a swirl of red and black, as if the basketball legend materialized mid-dunk in a puff of United Center confetti. No, its not NBA Jam ’94, it's NBA 2k12, and it recognizes a key component of the NBA: history.

Five years from now basketball fans will look back at NBA 2k12 both as a marker of the state of the league today and as a history of the NBA since its beginning. Commemoration of the past is evident from the introductory theme song (Kurtis Blow’s 1984 “Basketball”) to the pre-game sequence featuring current stars competing against historical rivals. In the official intro video, Chris Paul crosses Gary Payton, Wade and Rodman battle for a loose ball, and Derrick Rose dishes a sweet assist around Pete Maravich to Michael Jordan for the breakaway dunk.

In-Game, NBA 2k12 is an encyclopedia of the sport, cataloguing every individual, team, and NBA record during the league’s 64-year history. Interested in seeing who led the league in field goal percentage in 1963? You’re only a couple button clicks away, and the same is true to see league leader for blocks, scoring, assists, steals, and every other statistical category recorded at the time.

As for the state of the league today, just turn to the “My Player” mode, where you create a player to go through the draft combine, listen for your name in the green room, and begin a (hopefully) historic career with an NBA organization. It’s all about putting up monster stats, right? 30 points a game doesn’t cut it in NBA 2k12; players must also balance their image, earning points through interviews and public service events to benefit their local and national perception, reminding us of the high expectations for an NBA player in 2013.

Each year will bring new and improved basketball games. NBA2k13 has already been released and, with its JAY-Z production and full soundtrack, earned rave reviews. What separates NBA 2k12, and will be the key to its future-history, is both the game’s commemoration of the past, the legends and all-stars, and its acknowledgement of the NBA’s global icon status and how that affects players.

Related:
• Future Histories project
• The Basketball Project
Posted by H. Rambsy at 8:34 AM