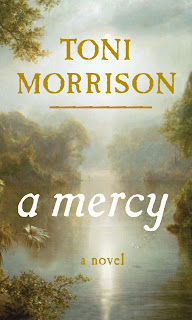 Written in stream of consciousness, Toni Morrison’s A Mercy (2008) exposes the life experiences of four women (all orphans), and how they became associated on the Vaark plantation. “Together, by trial and error they learned,” but with Jacob Vaark newly deceased, the structure within the community they built on the plantation crumbles; as each woman must find her voice or at least attempt. As they communicate their personal idea of America, all the stories intertwine and intersect at one point—the Vaark plantation, yet no character’s arrival on the plantation is as unusual as Sorrow’s.

Morrison introduces Sorrow as a “Red hair, black teeth” girl with “recurring neck boils and a look in those over-lashed silver-gray eyes,” that frightened most. In her presence “eggs would not allow themselves to be beaten into foam, nor did butter lighten cake batter,” and “the deaths of Mistress’ sons could be placed at the feet of the natural curse that was Sorrow.” Having “never lived on land” and suffering from memory loss, she was given the name Sorrow “because she was abandoned.”

Sorrow is the only character in the novel who refuses to conform to the American way of life, and marches to the offbeat of her own drum. The women in the novel speculate that it is because she has lived at sea and groomed “to be a crewman-to-be. Dirty trousered, both wild and obedient with one important skill, patching and sewing sail cloth” that she does not fit in; but, it is when she descended from the ship “the earth—mean, hard, thick, hateful—shocked her” this was not her home.

Searching for true identity and companionship, Sorrow behaved with “placid indifference to anyone, except twin” her invisible friend until she had her daughter. Once she had given birth, she “attended routine duties organizing them around her infant’s needs, impervious to the complaints of others.” The birth of her daughter has altered “the legitimacy of new status as a mother,” and for the first time, Sorrow speaks with certainty as she states: “I am you mother. My name is Complete.”

Sorrow, despite having loss all identity and former ways of living, is the only character in the story who finds happiness in new life. The Mistress bitter from losing her husband, the Native American woman Lena angry from losing her former lover/master, and Florence “had turned feral” from the wounds of slavery, while Sorrow, whose name brings grief finds contentment.

********
Briana Whiteside is a graduate student in English at SIUE and a contributing writer for the Black Studies Program.
Posted by H. Rambsy at 10:39 AM