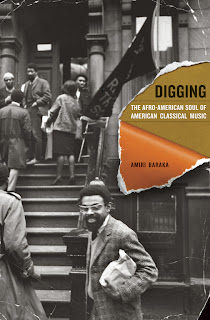 Earlier this week, I wrote a piece on my blog about the appearance of poets in the New York Times. I noted that I had come to initial conclusions that poets appear in the paper and most newspapers for three main reasons: their books are reviewed; they are recipients of awards, and their obituaries are published. There are only rare exceptions to that rule, and as some of you would probably guess, Amiri Baraka is one of those exceptions.

You’ll see Baraka mentioned in the Times when there’s a piece reflecting on some major moment of the 1960s, or when he is quoted in an article about politics in Newark, NJ, a city that has gotten somewhat regular attention in the Times over the last 10 years. What I’ve discovered is that Baraka gets more attention than most black poets in the paper as well as in African American scholarly discourse in part because he writes, performs, and contributes to activities well beyond the conventional genre of poetry.

Audiences have come to expect Baraka to speak on subjects outside of poetry. When and if you attend a poetry reading by Baraka, you’ll notice that during the question and answer period, people tend to ask him about politics and black struggle topics more so than strictly literary concerns.

The poet Kevin Young is written about a little more than most African American poets of his age-range in part because he too writes in multiple formats. In 2012, for instance, the NYT highlighted Young’s work 10 times, an extraordinary number for a poet of any race. Each of those references to Young, by the way, related to his essays and editorial projects, not his poetry.

Young is hardly called on to address political topics to the extent that Baraka is; however, the quantity and eclectic nature of Young’s work does resemble some of the qualities of Baraka’s. Both of these “poets” are essayists, editors, cultural historians, and kinds of ethno-musicologists. They are poets, for sure, but you somehow continually find them out there producing extra-poet works.