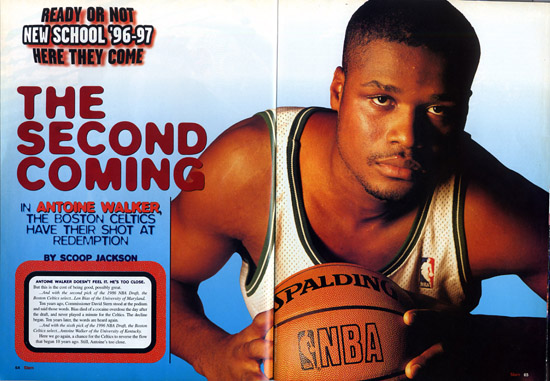 The average household income in America is $50,054. The average income of a professional NBA player: 5.15 million dollars a year. Take a moment to gather your brains, which have just been blown.

Now digest the fact that 60% of all NBA players file for bankruptcy – 60 percent! The average bankruptcy rate in America is 1.3%, with the average citizen working with less than 1% of the wealth. My apologies: I won’t blow your brains anymore, so you can clean up the mess for real this time.

The problem is transition, as urban black players go from poverty or near poverty to extreme wealth. Look at the epitome of NBA financial wreckage, Antoine Walker, who earned a whopping 110 million dollars  over his 13-year career, and yet in 2010 the former All-Star filed for bankruptcy. The Boston Globe ran a foretelling cover story in 2009 detailing Walker’s poor investments and his numerous family members who depended on Walker’s income.

Professional sports is one of the few occupations where individuals truly have the opportunity to drastically change socio-economic status, leap-frogging from poverty into the infamous “one percenters” literally overnight. Why is this transition more difficult for basketball players? For one, we know that basketball is a game without financial burden; any aspiring basketball player can pick up a ball and begin playing,

The availability of basketball has made it a distinctly urban game, playable on any parking lot or school playground, which cannot be said of hockey, baseball, or football. This idea of “urban,” as I highlighted last week, suggests more than the city environment. NBA executives know the situations of their incoming players; now it’s time for them to find a solution to help their employees cope with the stress and responsibility of transitioning into the “one-percent.”

Related:
The Basketball Project
Posted by H. Rambsy at 8:45 AM