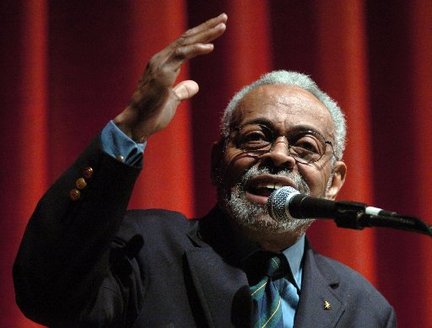 For the most part, poets are rarely viewed as controversial. That's not to say that they do not regularly take up provocative positions on topics. They do. But for the most part, when it comes to coverage, we rarely come across headlines about poets using the "n-word," getting into some late-night brawl at the studio (or, ummm, the writer's workshop), or producing "controversial" verse.

By and large, poets hardly make the news, and they don't become the subjects of popular public conversations. Accordingly, folks regularly assume that the art-form is dead or dying. Among other reasons then, the "controversy" tag often assigned to Amiri Baraka makes him a particularly unusual as a poet.

There is even a "controversies" subheading for the Baraka entry on wikipedia . No other prominent black poet -- not Maya Angelou, not Sonia Sanchez, not Nikki Giovanni, Rita Dove, Lucille Clifton, Kevin Young, Natasha Trethewey, nor Yusef Komunyakaa -- has that designation. Again, this is not to say that other poets aren't at least occasionally controversial, which anyone who has attended a Giovanni talk knows. Still, the controversy tag has stuck with Baraka like no other well-known African American poet.

In some respects, being viewed as controversial in poetry, a genre typically viewed as non-controversial, has its benefits. People, even beyond the realms of poetry, are inclined to listen when Baraka writes and reads in ways that they do not for other poets. In addition, being labeled controversial means Baraka has long-time detractors and long-time advocates, which is to also say, he has long-time, actively engaged audiences.

My students are often surprised and intrigued by Baraka in large part because of his frank, street-wise, and vivid insults of political and cultural figures. Few of the 100 poems we cover move my groups like Baraka's controversial "Dope" and "Jungle Jim Flunks His Screen Test." Some of Baraka's remarks are understandably offensive to some, and yet his sharp and cutting critiques of racism and  intra-racial restraints make him something of a culture hero to others.

Related:
A Notebook on Amiri Baraka
Django Unchained and the trouble with non-controversial black art
Posted by H. Rambsy at 8:12 AM

Poets like Amiri Baraka, and the few that are labeled "controversial," have a strong impact on the minds that read the poetry.