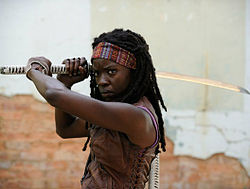 Since I'm sometimes critical of the television representation of Michonne on The Walking Dead, I had to remind myself recently why I, and apparently others, like her so much. She's often projected as angry and thus not complex and contemplative. Yet, she's still special for a few different reasons.

For one, she breaks the mold of the typical helpless woman in the zombie genre. As Lorraine Berry has noted, in The Walking Dead "white men rule. Men of color are reduced to occupying a nebulous space, and women (with rare exception) are to be protected." In the comic book and on the show, Michonne hardly needs protection and ends up demonstrating remarkable skills destroying zombies and saving others.

In addition, unlike the "nebulous" place occupied by men of color in The Walking Dead, Michonne holds a more central position in the narrative. There's almost no direct commentary on her race, yet she rocks locks, and her love interests in the comic book have been African American men. So despite the silence about her race, viewers are reminded that she has distinct cultural ties to African Americans.

Michonne's skill at using a katana further accents her mystique as a highly capable fighter, a warrior in fact. She is perhaps one of the most exquisite killers of the undead in all of zombie discourse. That she is neither male nor white and nonetheless possesses such extraordinary skill enhances the sense that she is unique and powerful.

Although Rick Grimes, the small town sheriff, is the primary protagonist of The Walking Dead, Michonne has easily become the most iconic figure of the comic book and television series. There are Michonne action figures, special, collector's editions of comic books featuring her, and a growing body of writings about her.  I certainly wish the show writers gave her more complexity, but she still already represents some notable innovations to the genre.

Related:
• A Notebook on comic books
Posted by H. Rambsy at 5:46 PM