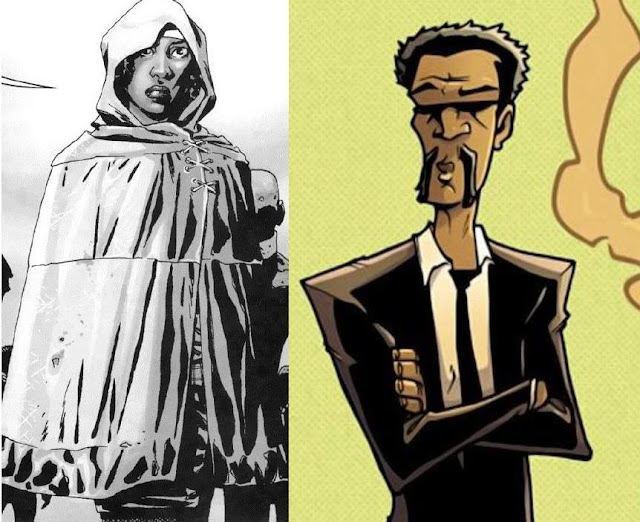 I can't remember the last time I spent so much time thinking about comic book characters. But this past semester, I ended up having extended conversations about Michonne from The Walking Dead and Caesar Valenzano from Chew. I know, I know: seems so cliché for the black studies guy to be interested in black characters. I'll have you know, though, I'm into more than just those characters, though,admittedly, those two have drawn me in for particular reasons.

Michonne appears in the television and comic book versions of The Walking Dead, so I'm likely to have more talks about her than Caesar. Relatively few folks in my circles follow comic books, but I know many who watch the television show. The rarity of seeing an ass-kicking sister in a key role on such a popular show opens up all kinds of discussion. Too often perhaps, I end up complaining about how angry they make the television Michonne. She's still my favorite character.

Caesar's look and demeanor are based on Jules Winnfield, the character Samuel Jackson played in Pulp Fiction. Something about that Sam Jackson reference makes me chuckle nearly every time I see Caesar show up in the comic book. There are more reasons, however, that I keep reading and laughing at Chew, including the weird story about a cibopathic (someone who can sense the past of organic materials just by taking a bite) and the humorous, witty, and far out artwork by Rob Guillory.

The artwork of Chew and The Walking Dead, by the way, offers a distinct juxtaposition and thus an overall fascinating reading experience for me. The Walking Dead comic book is in black and white, and given the zombie theme, the mood is somber, gloomy, deathly. There's some death and violence in Chew, but overall the series is comedic, with vibrant colors and cartoony illustrations.

Therefore, I turn to Caesar for jokes, and I expect seriousness when I look to Michonne.