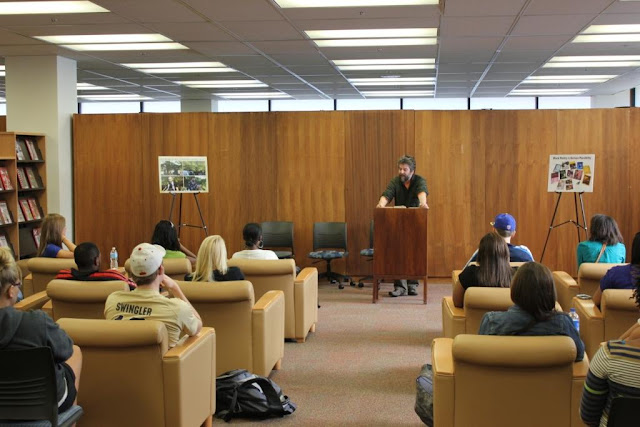 On December 3, literature professor Jeffrey Skoblow read a few poems at the library as part of our annual book festival, where we showcase books, authors, and ideas. Skoblow read Walt Whitman's "Respondez!," Allen Ginsberg's "America," and Amiri Baraka's "Hymn for Lanie Poo" and a selection from Baraka's volume
The Dead Lecturer.

Skoblow is one of our university's most active public readers. Every fall semester with Erick Ruckh from the department of history, Skoblow does a reading of Ginsberg's "Howl" to celebrate the occasion of the poet's initial public presentation of the poem. Ruckh and Skoblow do the reading outside, and I'm always pleased when I can catch them. They've also done a reading of Ginsberg's work in the Underground Reading Room.

At the reading on Monday, Skoblow displayed more of his repertoire by focusing on Whitman, a literary forefather of Ginsberg and then Baraka, one of Ginsberg's contemporaries. Hearing Skoblow read works by the three poets in succession seemed to clarify their links to one another.

Over the course of the semester, my students have read and listened to audio recordings of various poets. However, Skoblow's reading gave them the chance to hear a "live" presentation of works by prominent poets. I'm pleased that we've been able to give so many students multiple ways of engaging poetry this semester.


Given my interest in print culture and literary history, I was also fascinated that Skoblow read the poems from volumes by Ginsberg and Baraka (known as LeRoi Jones at the time) that he had acquired during the early 1970s at a bookstore in his neighborhood. Apparently those were the days: Skoblow purchased Baraka's Preface to a Twenty Volume Suicide Note (1961) and The Dead Lecturer (1964) for $1.50 and $1.45, respectively.