Last Friday, Oct. 7, Professor of History Eric Ruckh and Professor of English Jeffrey Skoblow celebrated Allen Ginsberg's poem "Howl" with an outdoor reading. A group of folks gathered around and listened as the two read.

These public readings by Ruckh and Skoblow are part of a kind of unofficial yet consistent series. Last year, I caught them for another Public Reading of A. Ginsberg's Poetry.

This year, like last, Ruckh and Skoblow did a collaborative reading of Ginsberg's poem as they alternated between reading a series of lines and stanzas. At points, they read in unison.

Beyond the more than two dozen of us who were standing and sitting nearby to hear the reading, I noticed several students passing by slowing down and pausing to figure out what was going on. What are those people listening to, and who are those guys reading and performing?

The site and sound of two college professors celebrating "Howl" is perhaps uncommon on campus? Maybe. Whatever the case, a couple of weeks previous to the event, I saw Ruckh in passing and wanted to know if they planning any readings. He let me know that Skoblow was going to be sending out messages soon making announcements about their annual public Ginsberg reading. 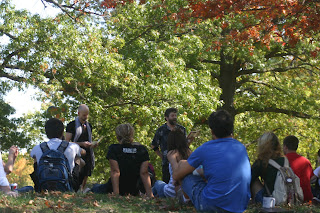 Sure enough, the messages arrived, and there we were listening to "Howl."
Posted by H. Rambsy at 7:21 AM