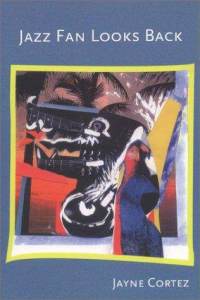 Jayne Cortez, who passed recently, was one of several black arts era poets, including Amiri Baraka, Larry Neal, Carolyn Rodgers, Sonia Sanchez, Haki Madhubuti, Sarah Webster Fabio, and Etheridge Knight, who made jazz central to their writings. Cortez, like many black poets of the era, highlighted and memorialized  various other musicians in her works.  Ultimately, they made jazz one of black poetry's most central intellectual traditions.

Cortez, for instance, in her poem "How Long has Trane Been Gone," celebrates the famed saxophonist and focuses on African American political and cultural histories, pride, musical ideas, and black aesthetics. In her various recordings, she also collaborated with jazz musicians. And she was not alone.

Jazz was a fundamental element of black arts discourse and the production of African American poetry during the late 1960s through the 1970s. Poets such as Sanchez and Baraka, to name just two, seemed to even fashion themselves as poet-musicians. And more importantly, there seemed to be an expectation that poets serious about writing "black" poetry needed to study the music.

Not surprisingly, when Cortez pulled together a collection of her selected works, she could easily and fittingly entitle it Jazz Fan Looks Back. Of course, many of us always viewed her as more than the average fan.