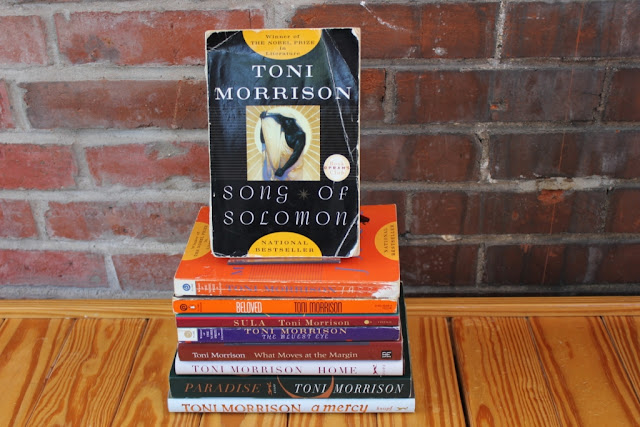 A couple weeks ago, while beginning to prepare a paper, I stumbled across the concept of the "uncanny," which has now turned into a much larger project. When applied to African American literature texts, the term "uncanny" (unusual / strange) provides a new way of viewing African American women characters. Toni Morrison’s Song of Solomon, situates an uncanny black woman named Pilate into a community where she is ostracized and feared. However, it is because the majority of the community isolates her that she is able to shine and stand out with all her unusual features and abilities.

There is one key scene in Song of Solomon that drove this whole uncanny + black woman = supernatural character theme, and it was when Pilate’s daughter Reba was getting beaten by her suitor. When Pilate is made aware of the situation, she does what any mother would do, save her child. But the way she does it is weird. She “looked up from the geography book she was reading and closed it. Slowly walked over to a shelf that hung over the dry sink, put the geography book on it, and removed a knife. Slowly still, she walked out of the front door.”

This scene is uncomfortable because Reba is in a domestically abusive relationship, and her mother Pilate seems to casually, not alarmingly, move to assist her child. Her calm reaction to her daughter’s swollen eye, bloody nose, and badly bruised cheek draws attention to Pilate’s unusual personality and approaches. Finally and stealthily, she approaches the abuser, wraps her arm around him, inserts a knife into him, and calmly whispers, “Women are foolish, you know, and mamas are the most foolish of all."

The calmness of her speech and slow pace contrasted with her preparations for murderous action amounts to a tense and captivating scene. Readers are presented with the view of an alien-like black woman character unlike the more well-known stereotypical out of control, loud, and angry black women. Morrison’s creation of Pilate creatively distorts conventional views of African American woman characters and popular portrayals on television and in film. Morrison creates a black woman who “can go months without food” and “turn a man into a ripe rutabaga—all on the account that she had no navel.”

I am interested in moving away from the standard representations of black women and focusing more on the unusual black woman characters in literature. These rare characters challenge the conventional perceptions concerning who black women are and what they are capable of, and their presence seems to unsettle reader expectations.

********
Briana Whiteside is a graduate student in English at SIUE and a contributing writer for the Black Studies Program.
Posted by H. Rambsy at 8:32 AM