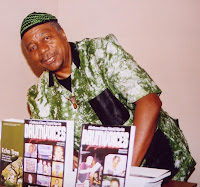 On Thursday,  November 29, my black studies crew and I will host a small reading celebrating our main man Eugene B. Redmond (EBR) who turns 75 on  December 1.

As a lead up to his birthday, I decided to highlight approximately 75 facts concerning his life and career. For now, I'll begin with 25 quick facts:

1. was born on December 1, 1937.
2. was born in St. Louis, MO, and later moved to East St. Louis, IL.
3. graduated from Lincoln Senior High School in East St. Louis in 1957.
4. served in U.S. Marine Corps from 1958 – 1961.
5. worked as the associate editor of the East St. Louis Beacon from 1961 – 1962.
6. co-founded the East St. Louis Monitor weekly newspaper in 1963.
7. received his B.A. in English Literature and Political Science from Southern Illinois University in 1964.
8. received M.A. in English Literature from Washington University, St. Louis, MO, in 1966.
9. began working at the Experiment in Higher Education in East St. Louis in 1967.
10. met dancer, choreographer, and organizer Katherine Dunham in 1967.
11. met the poet and writer Henry Dumas in 1967.
12. published the poetry pamphlet A Tale of Two Toms, or Tom-Tom (Uncle Toms of East St. Louis and St. Louis).
13. lost his good friend and colleague Henry Dumas, who was murdered by police in New York City, 1968.
14. began working with Loretta Dumas and others to bring Dumas’s unpublished works into print in 1968.
15. met poet Quincy Troupe in 1969
16. began a visiting professorship at Oberlin College in 1969
17. utilized Oberlin’s well-resourced library to begin black poetry research project on what would eventually become Drumvoices: The Mission of Afro-American Poetry
18. met the writers Ishmael Reed, Steve Cannon, and Jayne Cortez at a writer’s conference in New York City in 1969
19. began teaching at University of California Sacramento State in 1970
20. published his volume of poetry Sentry of the Four Golden Pillars in 1970.
21. published his volume of poetry River of Bones and Flesh and Blood in 1971.
22. published his volume of poetry Songs from an Afro/Phone in 1972.
23. published his volume of poetry Consider Loneliness as These Things in 1973
24. produced an LP of his poetry Bloodlinks and Sacred Places in 1973.
25. published his volume of poetry In a Time of Rain & Desire in 1974.

EBR was the first of his mother's 8 children to be born in a hospital. The hospital in East St. Louis did not serve Black people. That why he was born in St. Louis.

Can any of this blog's followers name the hospital for colored people in St. Louis? It still stands today and it is now a retirement home, serving primarily African American residents:)