Where are you, Audre Lorde? 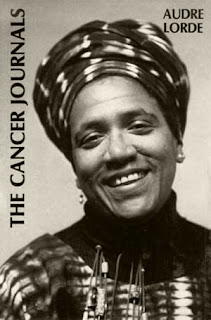 I've thought quite a bit about what's available at public book sales spaces as those spaces forced me to look elsewhere for writings by women of color about illness. Searches for texts like Audre Lorde’s The Cancer Journals at local bookstores have proven unsuccessful and disconcerting. Why is it that such an important illness narrative remains missing from the shelves of Barnes & Noble and Half Price Books? Why is it that among the volumes of white women’s breast cancer narratives accessible on those shelves, not one physical copy of a black woman’s autobiographical account of illness, or that of any woman of color, is present?

This absence deeply troubles me. As a Chicana who five years ago witnessed and felt the devastation of breast cancer through my mother’s own struggle with the disease, it troubles me to continuously encounter homogenous literary representations of illness that do not acknowledge race, gender, class, and sexuality as constitutive factors that shape a person’s experience with illness and her interactions with the medical industrial complex. The dearth of illness narratives by women of color in mainstream bookstores reflects a historical pattern of privileging the voices and experiences of some while simultaneously and conversely under privileging, and thus diminishing, those of others.

And, who are these “others”? In this context, they are women like Audre Lorde—black women and other women of color—whose suffering, and whose survival through literary record, continue to go overlooked by those who select what texts get displayed on bookstore shelves. More than an inadvertent oversight, the exclusion of these illness narratives represents a symptom and consequence of a broader sociopolitical structure that continues to negate the lived experiences of US women of color.

Lorde is not entirely inaccessible at bookstores in my area. During a recent visit to Barnes & Noble, I saw a few collections of her poetry appropriately housed in the poetry section. But where is The Cancer Journals? “Not available in the store,” the bookseller tells me. There are no autobiographical accounts of breast cancer by an African American woman in the store, even though statistics identify African American women as the group with the highest breast cancer mortality rate.

The presence of illness autobiographies by women of color in public spaces like bookstores is important because they affirm the lives and experiences of the writers themselves, and they also often provide much needed insight into the complexities of what it means to be sick in a society that already treats racialized groups, and particularly women, as diseased. Moreover, the presence of illness narratives by women of color significantly contributes to an ongoing effort to depathologize “sick” bodies, whether those bodies are literally afflicted with illness or socially conceptualized as such.

******
Christina Gutierrez is a graduate student in the English program at the University of Texas San Antonio. She writes about 20th and 21st century Latina and African American women’s illness autobiographies, Black and Chicana feminist theories, and the history of science in the US as it pertains to the medicalization of women’s bodies.
Posted by H. Rambsy at 10:34 AM