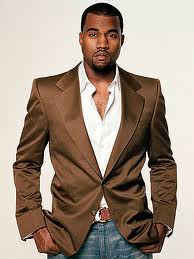 Every so often, I have to change the music in my workout playlist so that I don’t get bored. Recently, I came across Kanye West’s verse on "E.T." by Katy Perry and “Monster” featuring Nicki Minaj and Jay Z. I offer two portions for our consideration.


“I’m living in the future so the present is the past./My presence is a present. Kiss my ass.” (K. West, “Monster”)


As I think about West’s career trajectory, it strikes me that his recent turn to the monstrous showcases the radical potential of disability studies melded with black aesthetics. It also remains indicative of stagnancy in his ability to realize that radical potential.

Douglas Baynton talks about the way Black people avoided affiliating with disability because it had often been described as a trait that inhered in blackness. When West (and Jay Z and Minaj) embrace their monsters, they turn to the non-normative, the freaks, the monstrous. Far from simply metaphorizing monster as braggadocio entertainer, the use of the monstrous here becomes a gateway to understanding one’s own presence in an alien land (be it politics, fashion, wealth, fame, or any other world).

Monsters violate our boundaries, transgress, transform, and force some to transpire. In adopting this transgressive figure, West repositions blackness as alien and freak. Certainly, we understand that blackness is non-normative, but West’s monster makes its kinship with the disabled and other non-normative bodies more clear.

Yet in his verse from Katy Perry’s “E.T.,” West gives us another kind of monstrosity, another kind of alien. His promise to disrobe and probe his intended mate recalls the monstrous figures of racist fantasy. His ‘alien sex’ (both verb and noun) becomes the nightmarish smut titillating the lynch mob with its hypersexual, lascivious black man at the center.

The track production tricks (skipping and voice changing) does repeat his “what to do” and turn it into a question he perhaps asks in a harried and skittish fashion. The discrepancy between the production and the lyrics implies an ambivalence toward the radical potential of embracing the alien. On the one hand, it conjures escape. On the other hand, it reasserts familiar discomfiting ideas.

Given West’s heretofore outspoken nature and artistic experimentation, I take for granted that he is thinking in public. I also reserve the use to have another hand in the conversation. Surely, we can have that. Cause everybody knows. We’re mother effin monsters.

******
Therí A. Pickens is an assistant professor of English at Bates College and a contributing writer for Black Studies @ SIUE.
Posted by H. Rambsy at 9:21 AM